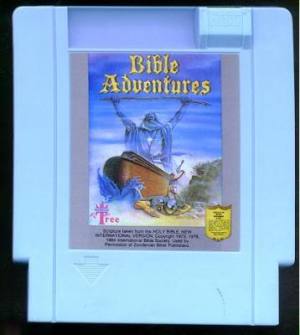 As I was transcribing and commenting on EGM’s Top 100 list, I came across a game that is holier than thou.  This sacred game, Bible Adventures is displeasing to the Lord, but nevertheless I decided to research the company that created it.  It turns out, they have several award winners that for some reason or another never ended up on EGM’s greatest games lists.  Some of these classics include: Jesus in Space, Bible Adventures, Spiritual Warfare, Noahs Ark 3D (their typo, not mine), Bible Touchdown, Bible Grand Slam Deluxe, Galilee Flyer, Interactive Parables, and last but not least, GodSpeed.

These games intrigued me for several reasons, but one thing that really amazed me were their clever titles that emphasize the core values of Christianity.  Take Spiritual Warfare for example.  It features what Jesus himself promoted: warfare.  A knight with a sword has a prominent place on the box art, so clearly this is a game about defeating the infidel.  Of course that’s not at all like what terrorists in the Middle East are doing, right?  This game clearly represents the Christian ideal of "loving your neighbor as yourself".  Boy, is this Wisdom Tree sure doing devout Christians a service by giving them alternative products to those evil secular games that also promote violence.  The best thing about this ground breaking title however, is that it’s only $7.50.  Isn’t this incredible deal enticing?  You get a game that has low-quality NES graphics for only $2.50 less than a mediocre XBLA title like Bionic Commando. 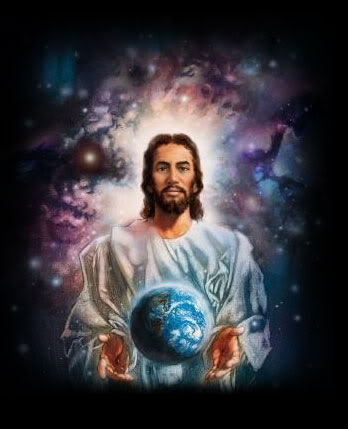 Even though the devil was tempting me to purchase Spiritual Warfare, I resisted, and focused on one of Wisdom Tree’s other spectacular adventures.  This game that kept my spirit whole was none other than Jesus in Space.  Unlike some other games on Wisdom Tree’s website, Jesus in Space works with Windows Vista and only costs $22.95.  Before I scrounged up some lunch money, I decided to read the description of the game on the developer’s website.  The premise even puts classics like Chrono Trigger to shame.  Here is the divine description that is clearly the will of the lord: "Join Captain Paul Hammer, Lieutenant Stu Dent, and Shelbot the Brainy Robot on a "Great Commission Adventure" to teach the Gospel on newly discovered worlds."  Man, don’t you love all those clever puns like "Stu Dent?"  Honestly, if I was to travel into space, the first thing I would do is spread the "wisdom of the Lord" into space.  I mean come on, we’re incredibly intelligent people right?  We do great things like build up huge stockpiles of nuclear weapons, enslave others, commit genocide, spread faith by the sword, and create biological weapons.  Clearly, God wants us to impart "divine" wisdom found in the Bible to other species that were not fortunate enough to receive "his message".  Well, as fun as journeying to places like "Planet Vet," "Planet Whammo," and "Ice Moon Alpha" sound, I decided to conjure up some new titles Wisdom Tree fans might enjoy.  Here are my divinely inspired ideas:

First I would create a sequel to Jesus in Space called, Jesus’ Submarine Adventure.  In it, Jesus would shoot Bibles at enemies of God and mingle with Peter the Dolphin.

My second title is called, Thomas Doubts the Priest.  In this fantastic adventure, Thomas will go around to various churches and harass priests until they expel him from their respective places of worship.  Thomas can throw pies, install cherry bombs in toilets, and spy on priests with binoculars.  The goal of the adventure is to reveal the pedophile priests without getting excommunicated by the church.

Finally, I would create  a sequel to Galilee Flyer called Peter Paddle Battle.  In the game, Peter will challenge good Samaritans to high speed races across the tranquil Sea of Galilee.  If Peter hits Jesus who is walking on water, the game automatically ends.  However, Peter can sink boats using his holy cannon as long as they aren’t followers of Jesus.

Unfortunately, God is no longer communicating with me, so I am out of ideas for the moment, but hopefully Wisdom Tree will consider creating these sure-to-be epic games.  Who needs Final Fantasy XIII when you can play Peter’s Paddle Battle?