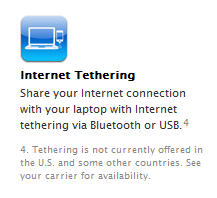 Apple’s third-generation iPhone software makes its debut on Wednesday. But read the fine print before you blow $299 on a new iPhone 3G S. You won’t be able to send videos until “late summer.” You won’t be able to tether your phone to your laptop for use as a wireless modem.

AT&T, whose support of these features is required for them to work, is behind schedule on MMS support. The company is not supporting tethering at all in the US. AT&T was nearly booed in absentia when the non-availability of these features was announced at last week’s Apple’s big conference for software developers.

There are dozens of wireless carriers in dozens of countries that support these features. Why is AT&T behind the curve here? A spokesman for the company told the New York Times only that there are “network issues.”

The most credible rumors are that AT&T needs to update a few million customer records to enable MMS, and that the carrier will offer a tethering plan as an add-on service, for an additional $70 a month or so. That would make having an iPhone like having a Verizon card for your PC, if the Verizon card didn’t work very well downtown.