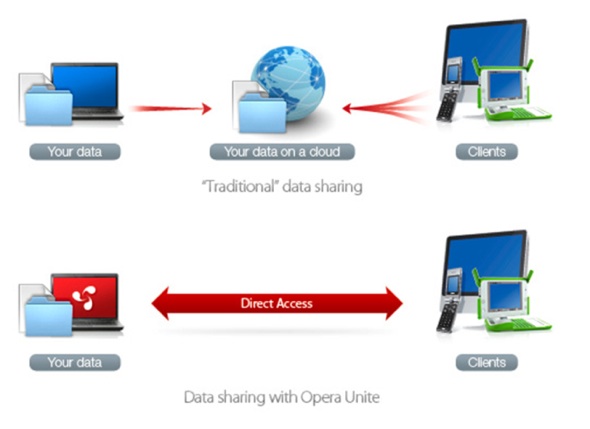 Browser-maker Opera announced a new service today that it says will “reinvent the web” — Opera Unite, which basically turns your computer into a server, meaning that you can directly share content and communicate with your friends on the web, rather than going through a third-party service. It’s a cool idea, but also one that sounds like a very mixed blessing.

The early version of Opera Unite released today includes six services — file sharing, a web server for running entire web sites, a media player, photo sharing, “The Lounge” for chatting, and “The Fridge” for leaving notes. Again, all of the data and services remain on your computer, rather than on servers run by another company. You also control the privacy settings, meaning that the content can be made available to the entire web, or to just the people you provide with a password.

A lot of Opera’s press materials revolve around the idea of “empowerment,” and that’s not just marketing speak — you give up a lot of ownership and control when you allow your content to sit on someone else’s servers. Hence the concern from users when services like blogging site Pownce and website hoster Geocities get shut down, creating the need to migrate those posts and pages elsewhere, or else watch them disappear from the web.

Unfortunately, this empowerment comes at a big cost: Since the data is accessed from your computer, once your computer goes offline, so do your web pages, or shared photos, or whatever.

In a way, Opera Unite sounds like the very opposite of what companies are trying to do with cloud computing. When you access applications in “the cloud” (i.e., online), the device (i.e., your computer, or your laptop, or especially your netbook) you’re using to access data or services doesn’t matter, and the availability of servers from Google, or Amazon, or Twitter is paramount. With Opera Unite, it’s your computer that’s paramount. I guess this model might make sense for businesses or consumers who have desktop computers that are on  and are connected to the web 24 hours a day, seven days a week. Then you could use other devices, like laptops and phones, to access those computers remotely.

On the other hand, for people whose only computer is a laptop that frequently goes on and offline, this makes no sense whatsoever. And that includes, um, basically everyone I know.