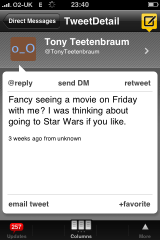 TweetDeck is one of the most popular desktop applications that serves as a social network console. Its multi-column layout, based on a drawing that developer Iain Dodsworth discovered tacked to the wall at a Starbucks, has proven popular with social networkers who want a full-screen console for their Twitter and Facebook chats. Dodsworth’s design is both attractive and efficient. It places the user’s tweets, direct messages, replies, and public timeline side by side in parallel columns.

Today, Dodsworth’s iPhone version of TweetDeck was published in the iTunes App Store. It’s free, and as with the desktop TweetDeck, Dodsworth says he has no plan to monetize his surprise hit. On a phone call, he said his goal for now is to grow the audience as much as possible, and then figure out how — if at all — to make money from it.  He sounds like that lovable kind of developer: A  man who only wanted to write a cool program, without a master plan to make money from it. 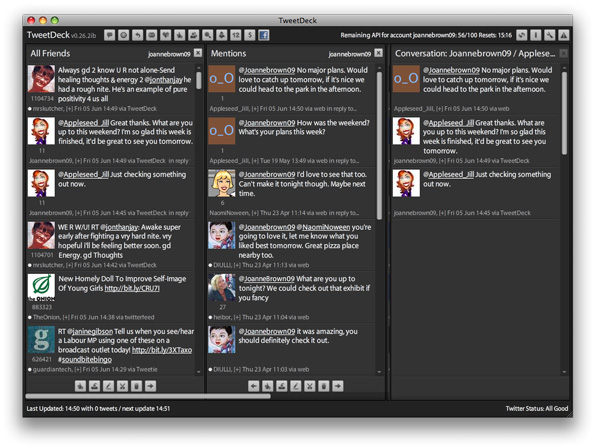 TechCrunch writer Erick Schonfeld tracked down TweetDeck  investor John Borthwick of Betaworks (surely he has ideas on how to monetize the warm fuzzy feelings around TweetDeck) and filmed demos of both the iPhone version and an updated Mac client. The desktop client now allows multiple Twitter accounts, a must for Twitterers who need to keep work and social lives separate. But it also adds features that should appeal to newbies: Tagclouds that show what’s being talked about, and a list of 300 suggested users similar to the one Twitter has. (No doubt there are already people griping about not making the list.)