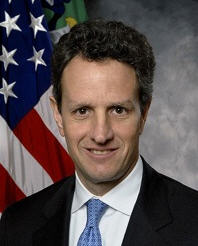 Despite complaints from venture capitalists, it looks like president Barack Obama’s administration is still pushing forward with a plan to increase regulation on the venture capital industry by requiring VC fund advisers to register with the Securities and Exchange Commission.

Treasury secretary Timothy Geithner (pictured) first suggested in March that this would be part of the Obama’s plan to overhaul the United States’ financial regulatory system, and the language in the administration’s new proposal (below) is very similar to Geithner’s initial testimony:

All advisers to hedge funds (and other private pools of capital, including private equity funds and venture capital funds) whose assets under management exceed  some modest threshold should be required to register with the SEC under the Investment Advisers Act. The advisers should be required to report information on the funds they manage that is sufficient to assess whether any fund poses a threat to financial stability.

As you might expect, the National Venture Capital Association, which lobbies for legislation that’s favorable to VCs, has been criticizing the idea. NVCA Vice President of Strategic Affiars Emily Mendell said this kind of legislation has been proposed and dropped before. The NVCA’s main argument is that venture capital — which just doesn’t manage enough money to warrant this kind of scrutiny — is being unnecessarily lumped in with other types of funds. (That lumping in is reflected in the language of Obama’s proposal, where VCs are just mentioned as an example of “other private pools of capital.”)

We believe that the entrepreneurial risk associated with the venture capital industry is not relevant to the systemic risks which the Administration is hoping to mitigate with this reform. In fact, maintaining an environment that supports entrepreneurial risk is critical to economic growth for the nation as a whole. Although critical details such as the threshold level for registration are still emerging, sweeping venture capital into this proposed plan, could place an undue burden on smaller venture firms which should be directing their resources towards identifying and building new companies and growing jobs.

As Dowling notes, there are still many details about the proposal that haven’t been released. Senator Jack Reed, chairman of the Senate banking subcommittee, has introduced a bill that would set the threshold for registration at $30 million under management, according to The Wall Street Journal. That’s “modest” indeed, and would include the majority of the venture industry.