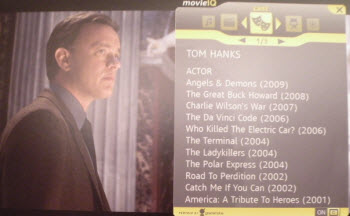 Sony announced today that it will launch MovieIQ, a service that delivers up movie trivia and information to Blu-ray movie watchers.

The new service will launch in September on Blu-ray devices that can hook up to the Internet to fetch data associated with the particular disc being played.

With MovieIQ, you can call up trivia related to the exact movie scene you’re watching by just pushing a button on your remote. You can, for instance, click your remote and find out where a particular scene of a  Tom Hanks movie was filmed. A small yellow icon appears on your screen whenever there’s something to click upon. And you can hide the icon with a single click if you prefer to watch uninterrupted. The available trivia might answer questions ranging from “what song is playing?” to “where have I seen this actor before?”.

MovieIQ is always up to date because it fetches data from the Internet. It thus makes use of BD-Live, a feature of Blu-ray discs that allows them to fetch data from the web. Fritz Friedman, an executive at Sony Pictures, said at the press conference in San Francisco that the new features will help Blu-ray gather momentum and help set Blu-ray apart from DVD. MovieIQ was developed over the last year by Gracenote, the movie and music database company that Sony acquired. 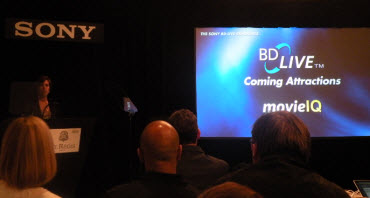 Overall, Blu-ray sales are still rising, despite the recession. Blu-ray hardware sales were up 400 percent in the first quarter compared to a year earlier. Blu-ray disc sales were 37.4 million in 2008, up 316 percent from 9 million in 2007. Friedman said those numbers are much higher than the rate of movie downloads over various web services. That shows, he said, that disc formats aren’t going away even in an age of digital distribution.

The high-definition video that Blu-ray delivers goes well with HDTVs, which are now in 40 percent of U.S. homes, Sony Pictures vice president Rich Marty said. Tracey Garvin, a Sony Pictures marketing executive, said more than 100 BD-Live movies have shipped in the past year and 5 million consumers have now accessed a web-based screen on those BD-Live movies.

Blu-ray needs BD-Live functionality in part because the DVD format has been stubbornly successful. Although Blu-ray pictures are sharper than DVD, people haven’t been motivated to get rid of their old format in favor of the new.

Sony’s recently released Ghostbusters movie has a feature dubbed Cinechat that lets you watch and discuss a film with friends in distant locations. That kind of feature is possible thanks to BD-Live. Sony’s Abary said that PC makers have all adopted Blu-ray. And today Sony Electronics is launching its Vaio NW laptop, which has a Blu-ray player in it. It costs $879, which is a low price for a Blu-ray enabled laptop.