Trendwatchers take note: Brazil offers a fascinating glimpse at how rapidly social media has changed internet usage patterns. Brazilian consumers spend an average of 19.3 hours online for personal use versus 9.8 hours watching TV, according to a study released by Deloitte. Sixty-seven million Brazilians now have internet access, which is approximately 34 percent of the population, reports Internet World Stats.

While Google’s Orkut social network is virtually unknown to Americans, its dominance in the Brazilian market is unparalleled by any other social networking site in the world. Comscore data from late 2008, shows that Orkut enjoys a 79 percent market share in Brazil. The same numbers indicate Facebook is popular with just 1 percent of Brazilian internet users.

With so much web activity on social networks in Brazil and elsewhere, it’s not hard to see the explosive advertising potential for companies that know how to engage this audience successfully.

Amanaiê is the Brazilian leader in creating social ads — product-based apps that work inside social sites such as Orkut. The Sao-Paulo based startup has already worked with some major market players such as Yahoo! Brazil and Universe Online, the country’s top internet portal. 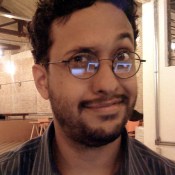 Gilberto Junior (right) is the Sao Paulo-based co-founder of Amanaiê. Junior recently launched Socialsmart, a company that invests in early stage Brazilian web startups along with New York-based investor, Michael Nicklas. Together they also co-founded Startupi a blog devoted to publicizing Brazilian startups. Below is an interview with Junior about his business and where the sector is headed:

VentureBeat: The idea of a company that develops social apps is a relatively new concept. How would you define the mission of your company and what you guys do?

Gilberto Junior: We address the problem of the lack of relevance in display advertising. We believe advertising can be more engaging and it can be where people already are, instead of trying to take them out of there and lead them to some kind of advertising website. Advertising should be viral and spread out spontaneously. Amanaiê, in just 10 months, is already the leader at the social ads market in Brazil. Digital advertising is changing. Digital display ads are working less and [becoming] less relevant over time. The new digital media is that one that engages the costumer. The advertising that is so relevant that the user wants to install it on their public personal profile on a social network.

VB: You told me in an earlier conversation that you have an American partner. How did that come about and what advantages do you see as a result?

GJ: Michael came here for a conference and did some research and met me looking for Brazilian startups. He found my blog, we had a coffe and started to talk about investing in Brazil and the opportunities that would come as Orkut launches the Opensocial platform for social apps. [Afterwards] , we started up Socialsmart and Amanaie.

VB: So what are the advantages of having a partnership that is based in New York and Brazil?

GJ: We look for business opportunities. Mostly, to problems here that were successfully solved in the U.S. and nobody is doing anything here and vice-versa. We can leverage the innovation from the two places and do better deals. We have experience on planning the strategy, design and development of applications for advertising and branding on social networks. That’s what we do best. And the same way brands need it here, they need it there too. As Brazilians have a taste and culture similar to U.S. and Europe, we already know what works and what doesn’t, and that is portable to those places too.

VB: Beyond the cultural similarities, is there a formula for what works?

GJ: I don’t think so. But as an investment company, you have to learn how to minimize the risks and find the better exit strategy. It goes back to the basics. What is the demand? How much will it cost? What is the business model? And, of course, as Michael is from New York, he is closer to opportunities there. If we have an idea that solves a problem, it applies to anywhere that has the same problem and is more likely that Brazil and U.S. have lots of same problems and ways they like to solve it….And the potential to gain in a internet market as big as U.S. is huge.

VB: What are some examples of cross-border collaborations you model yourself after? [Fotolog is a] photosharing startup from New York that became really famous in Brazil and ended up being acquired by a French group for a good sum. So, this is our narrative at Socialsmart. There are opportunities to invest in Brazil and make the exit on other markets because if one service works here, there is more chances it is going to work in Europe and U.S. too, while the truth is not the same in India and China.

VB: Why do you see the markets in China and India as so different from Brazil?

GJ: The Brazilian culture is much closer to Europe and U.S. If you make a photo sharing service, like Flickr, and it works here, there is a lot of chance that its gonna work on bigger markets like Europe and the U.S.,

while the culture in India and China is much more different.

VB: I saw that you made an app for Flickr how did that come about and how has it been received?

GJ: People who use it love it… and as Flickr is a niche product, they don’t want to be another Fotolog. The app is reaching the right target here in Brazil. They want to stay focused on more professional photos, not personal “teenager” ones, so everybody who is the target of the app knows about it, uses it and loves it.

VB: You’re also doing work with some of the major portals in Brazil, like Universe Online. Tell me what that collaboration looks like.

GJ: We are doing Orkut apps that drive traffic for the portals, mostly using some ludic features and titles of news and content with it, linking to the content itself of course so, we did a soccer app to drive traffic to news about soccer. Portals learned a lot with Orkut. When they saw that market was already taken they all tried to do an Orkut-like [social network] and leverage their audience power to win, but social networks are not like that. They don’t want to lose again now with the social apps audience. They know Facebook apps summed are making more money then Facebook itself.

VB: It sounds like you have been some pretty good traction with the concept of social ads. Can you talk about any resistance you have come up against and how you counter it?

GJ: Social ads in Brazil are just beginning, and we are evangelizing about that. Agencies, and even social media agencies — that were mostly focused on blogs here — don’t know what a social app is, what can be done, what is the potential audience, how much it costs… nothing. We are teaching the market about that. And in that process we are doing great cases with big players. For instance, we did a social e-commerce app with a Brazilian PayPal-like company. It’s just like what Facebook has done, and the Wall Street Journal said it is the most innovative thing of this year. We did it several months before them and before knowing they would do it.

VB: Is there anything you are working on that hasn’t been released that you can discuss?

GJ: We are looking forward to work with new technologies that enable us to work with the social graph made in the social networks outside of them we call it “data portability.” Technologies such as Facebook Connect and Google FriendConnect are just scratching the surface of what can be done when you have the connections between the users as a whole new layer on the internet that can be used on any application or web site content.