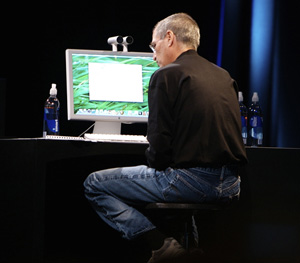 Do you believe Jim Goldman, the CNBC Silicon Valley Bureau Chief who once told us Steve Jobs had a cold, when the scrawny, wan Jobs was clearly in troubled health to anyone who got near him?

Today, Goldman says his deep inside sources  have told him that “Steve Jobs did report to work today, as I suggested in an earlier post, at Apple’s Cupertino headquarters, according to employees who have seen him on campus.” It’s generally presumed that Goldman’s source is his former CNBC coworker Steve Dowling, who heads Apple PR. We’ll wager that this time around, Apple’s PR department doesn’t dare try to lie to the pack of rabid reporters out for their blood.

Will His Steveness keep coming back to the office? I hope so, because since his attention turned to his health, the company hasn’t done anything nearly as innovative as the original iPhone launch. Yeah, I’m selfish that way.