Socialtext, which offers collaboration tools like wikis and microblogging for businesses, is trying to reach a more mainstream audience with a new price: Free.

The new version of Socialtext is called the Socialtext Free 50, and as the name implies, it doesn’t cost anything for up to 50 users. It sounds like a classic “freemium” model (i.e., lure in users with a free product and make money by convincing some of them to pay for the premium version), but President and co-founder Ross Mayfield is also adamant that the free product has to be useful in and of itself. Socialtext Free 50 includes all of the core products, including company social networks, blog publishing, a single wiki-style workspace, and a Twitter-like microblogging platform called Socialtext Signals. Socialtext already has more than 5,000 customers, Mayfield says, but he’s hoping the revamped business model will be able to widen the audience further, for example with smaller companies that need to collaborate but don’t have a serious budget for these kinds of tools.

“What I like about [the new model] is the edge use cases, which we wouldn’t have discovered if we still had the constraint of cost,” Mayfield says.

So with a rich, free product, what kinds of companies will actually pay the Palo Alto, Calif., startup? There are five key features not included in the free version, Mayfield says — accounts for more than 50 users, of course, but also more than one wiki workspace, technical support, an appliance for deploying Socialtext behind a company’s firewall (the free version is accessed via the web and hosted by Socialtext ), and access to SocialCalc, a new collaborative spreadsheet.

SocialCalc, by the way, is going into public beta testing today. The product is led by Dan Bricklin, who also developed VisiCalc, the first spreadsheet program for personal computers. Mayfield says that unlike some other online spreadsheets (such as the version offered by Google Docs), SocialCalc isn’t just trying to bring Microsoft Excel online. It’s probably “never going to be as feature-rich as Excel,” but that’s okay because it includes online-enabled features like embedding a wiki into the cell of a spreadsheet and private spreadsheets that only share specific data, he says. 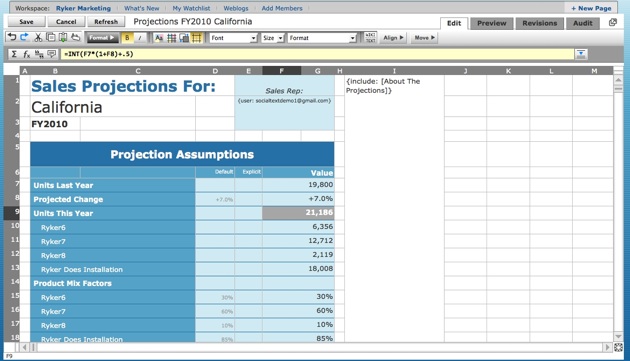