As inevitable as spammy invites, advertising offers are now coming to games that use Twitter. Super Rewards, a leading provider of offers for games on Facebook and other social networks, is launching its service with 140 Mafia, a mafia-style Twitter role playing game.

Just like in Mob Wars on Facebook and a variety of copycat applications on various social networks, 140 Mafia has you go around its virtual world committing crimes, earning money — and special favor points from a fictional Godfather, through offers. Using these points you can use to buy more powerful weapons that will allow you to commit higher-paying crimes in the game. The offers, syndicated by Super Rewards from third-party advertisers, can range from ringtone subscriptions to discounts on video games. Take a look at the screenshot, below. 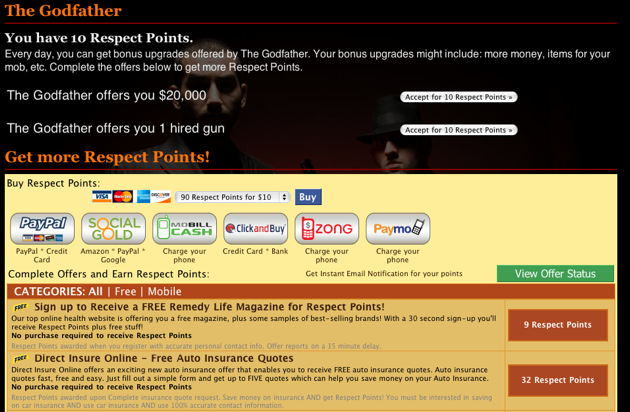 Offers have become a serious revenue model for gaming applications on social networks: At their best, these offers align the incentive of advertisers, the game and the players (and companies like Super Rewards). The player takes the offer, presumably for something they wanted anyway, earns the points, and succeeds in the game. The advertiser makes money from them, while Super Rewards and the game developer split the revenue from the advertiser. On Facebook’s platform, offers have become a key driver of revenue, and comprise a large portion of the hundreds of millions of dollars that those developers expect to make this year.

But Twitter is a different sort of beast from a social network. Games, like Spymaster, have been launching in recent weeks, and are designed to spread through getting Twitter users to announce what they’re doing in the game to all of their Twitter followers. In 140 Mafia, if you commit a crime, you can earn extra points if you tweet about it to your followers. The problem is that this is not a great user experience if you follow someone who is playing a game, but don’t actually want to play yourself. This is spam, as we’ve covered in the past, just like how third-party developers took advantage of Facebook’s news feeds in the early days of that platform. 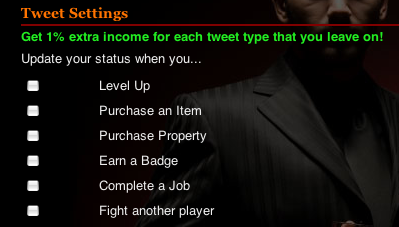 140 Mafia, like other Twitter-integrated games, lets you choose a variety of tweets to automatically send or not send to your followers, so I suppose that’s one form of spam prevention. Twitter needs to figure out how to make its service easier to use on this front. Sure, you can unfollow people who play these games — but what if they’re people you want to follow for everything they have to say, except when they (virtually) hijack a car? Facebook has most recently reacted to news feed spam by letting you set up filters for reading information from people you manually select; lifestreaming services, like FriendFeed, let you go as far as to filter out certain types of services, like people’s Twitter accounts. As more games spring up on Twitter and take advantage of its open form of communication, the problem will become more acute — and Twitter, one hopes, will have to act.

For its part, though, Super Rewards is happy to play along with Twitter game developers. There are only a few Twitter games out now, but it hopes to own a lot of this new market. Spammy or not, it’s so far, so good — usage and revenue “numbers are absolutely in line” with what Super Rewards sees on social networks, chief executive Jason Bailey tells me. Rival offer companies like Offerpal and Gambit haven’t moved in to Twitter yet, at least to my knowledge. It will be interesting to see if or when they do.