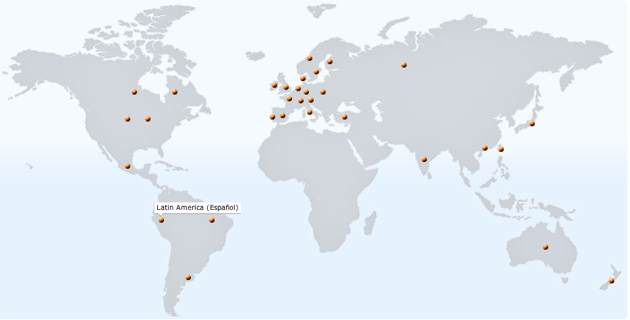 MySpace plans to lay off around 300 of its 450 international employees, and close at least four of its 15 international offices as the it tries to figure out how to survive falling traffic and revenue numbers. It laid off about the same number of people last week in its US offices, leaving around 1,000 employees as of today.

The social network spent the last couple of years trying to get more international users through building local offices and local sites for specific countries and regions. The plan didn’t really work, as the site’s international user base hasn’t grown too significantly. Here are the latest numbers, sent to me by MySpace:

Meanwhile, now-larger rival Facebook used a different strategy to grow around the world. It let users translate the site into their own languages themselves (okay, with the help of a few professional translators). That, combined with the popularity of Facebook’s overall product, has resulted in a user base today of more than 200 million monthly active users, 70 percent of whom are outside the US.

Of course, there are questions around how Facebook, MySpace and really most other social networks are going to be able to make money from international users. Most advertising dollars — social networks’ traditional revenue source — are spent in the US and a few other developed countries. Virtual goods appear to hold more promise, as users can pay for things like virtual gifts using very small amounts of money. With enough users, that might add up to billions (it already has in some places, like China).

No word yet on how MySpace plans to monetize its international users at this point. But it sounds like more focused ad sales efforts might be part. From the press release:

Upon completion of the proposed plan, London, Berlin, and Sydney would become the primary regional hubs for MySpace’s international operations. Under the proposed plan, MySpace would place all existing offices in Argentina, Brazil, Canada, France, India, Italy, Mexico, Russia, Sweden, and Spain under review for possible restructure. MySpace China, a locally owned, operated, and managed company, and MySpace’s joint venture in Japan would not be affected by the proposed plan.

We are focusing on London, Berlin, and Sydney for two very simple reasons: (1) these are markets where we have a lot of MySpace users as well as the resources to allow us to compete effectively and (2) these are major international commerce centers where a robust MySpace presence can help our company develop new and innovative business partnerships.

MySpace grew too big too fast — and didn’t focus on enough on its products — under cofounder and former chief executive Chris DeWolfe. The question for Van Natta is, what can he do now besides make cuts, as I and others have been asking. Perhaps MySpaceID — the company’s web-wide identity service — and its plans for a virtual currency and other new and forthcoming features will restore more of the company’s glory. MySpace isn’t talking about these specifics yet.

In other MySpace employment news, cofounder Tom Anderson is staying on-board as a sort of ambassador for the company.