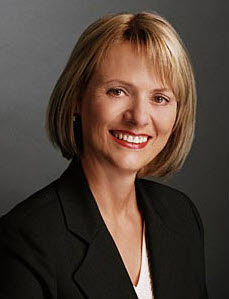 The first shareholder questions were tough, among them: why does the average Yahoo employee generate half as much revenue as the average Google employee. She said direct comparisons to Google were not fair because Yahoo has a different model from Google, which is a pure search company. She said search is algorithmic, while Yahoo is selling a more complete view, with both search and display advertising combined.

“You’re absolutely correct,” she added. “We should be more efficient.”

Asked about whether Yahoo should display more hard news on its home page, Bartz said, “I’m with you. If I see another thing on Britney Spears, I will throw up.” The intent, she said, is to deliver news that people want in a personalized way.

Another shareholder brought up Yahoo’s human rights record in China. The company was blasted for helping Chinese authorities track down dissidents by turning over information to the government. (Something for which Yang publicly apologized in 2007).

Bartz said it was a very difficult subject and Yahoo was committed to protecting human rights. “I beg you to understand, that everybody has their agenda, and inside a company, everyone gets cross-wise about where to have the biggest impact,” she said. “We have done things, but on these issues, it’s never enough.”

A representative from Amnesty International also brought up China’s recent crackdown on Tiananmen Square anniversary events and its attempt to monitor web usage.

In response, she said, “Yahoo was not incorporated to fix China.” She added, “Ten years ago, the company made a mistake and you can’t hold us up as the bad boy forever,” she said. “It is not our job to fix the Chinese government. We will respect human rights. But we will not take on every government in the world.”

As for social networking, she said that Yahoo is incorporating social networks such as Twitter into Yahoo so you don’t have to leave its home page in order to view the updates. But she said the company is looking at how to make social networking on Yahoo more seamless. At the same time, socializing Yahoo’s sites doesn’t mean turning it into another Facebook, she said.

Asked if the Google-Yahoo search deal would be resurrected, she said that antitrust concerns would likely mean that deal would not happen. “Justice is justice,” she said.

One shareholder asked if Bartz would buy newspapers because they are so weak. She said it wasn’t necessary, as Yahoo already has a partnership with 800 newspapers where newspapers can sell local ads on Yahoo sites. “They have to change their business model like we all do over time, but we have a very good relationship with newspapers,” she said.

Bartz said that when she arrived, she got nothing but questions about Microsoft and how she defined Yahoo.

She answered that if she ever has a deal with Microsoft, she’ll announce it publicly. As for Yahoo, she defined it as an online home where people go to find out what’s going on in the world and what’s going on with people they know. She also defined it as an integrated media company. The strength of Yahoo, she said, is that 12 percent of people’s online time is spent on Yahoo (in the U.S.). She said that if the company could double its audience, advertisers would come in spades.

“We don’t have a vision problem,” she said. “We have an execution problem.”

Bartz said she listened to a lot of people and realized one of the things she had to do was make the staff structure a lot cleaner. Another necessary task, she said, is building scalability into the thousands of sites that Yahoo operates around the world so that they run fast and work properly. When people come to Yahoo’s front page, they should have a “wow” experience.

Bartz said the evaluation of Yahoo’s brand continues, with a focus on what sites Yahoo should repair, shut down, or sell off to others. She believes that giving users the ability to customize Yahoo pages will be key to its recovery and that it has to be made easy. She also said the company will have to remake Yahoo Mail, the top email service, to help users fight clutter. In search, she said, “We haven’t been standing still.”

On mobile, she said Yahoo has half of all mobile users in the U.S. and is expanding its business in emerging countries where people are not likely to have PCs. Yahoo is “not just search technology, but a company that enables display ads.”

“Advertisers come to us,” she said. “I have been very impressed as I’ve traveled around the world. They want Yahoo to win and to learn how to do better online marketing.”

It will be interesting to see which direction Bartz takes Yahoo, and whether shareholders will follow.