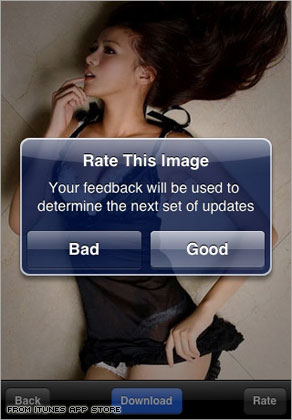 On Thursday morning, developer Allen Leung’s Hottest Girls iPhone app, a $1.99 download that showed pictures of Asian women in lingerie, began displaying topless models. I’m from California, so whatever, but the app seemed to fly in the face of Apple’s stated no-porn policy.

Within a few hours, Hottest Girls was disabled from being searched or downloaded. You could look at the app’s entry if you had its iTunes URL, but you couldn’t have it.

Leung wrote on his blog that he, not Apple, had disabled the app: “The server usage is extremely high because of the popularity of this app. Thus, by not distributing the app, we can prevent our servers from crashing.” Leung later wrote that “our servers are being hacked and overloaded.”

Who’s telling the truth? I have a trained reporter’s reaction to disbelieve any statement issued by a PR person. But Leung, so cocky and self-promoting yesterday, has now taken down his website content. I doubt it’s because he’s shy.