A blogger from Sysomos, which makes analysis tools for social media, has posted a set of infographics created by crawling Twitter during yesterday’s unfolding drama around the late pop star Michael Jackson. Some of the charts show demographic distributions that may suprise you. One shows the craziest traffic spike ever — the seismic rumble that Twitterers felt yesterday.

The chart above shows that most people tweeting about Jackson were under 35 years old, well below the 50-year-old superstar’s age.

Another chart, below, shows how Twitter traffic rocketed upon the news Jackson may have died. Once official announcements began to appear (people love blogs, but prefer to have the Los Angeles Times declare someone dead or not), traffic dropped off almost as fast as it had built.

A chart that breaks down tweets by nation is surprising in that both India and China were below 2 percent of total tweets, despite their billion-plus populations.

Sysomos’ buzzgraph below speaks for itself: “Cardiac” was a top search term, but so was dimewars.com, the site that posted a “Top 10 Michael Jackson moments” video. Here’s the bait for Twitterers: The clip collection begins with a TV comedy skit in which a trenchcoat-wearing reporter played by Bill Cosby is repeatedly rejected from a Jackson Five rehearsal, while little girls and a normal middle-aged white guy (it’s Tom Smothers, but it could just as well be Robert Scoble) walk through the door unobstructed. Get it? It’s a metaphor for the irrelevance of mainstream media! Yeah, I’ll just quit my New York Times gig right now. 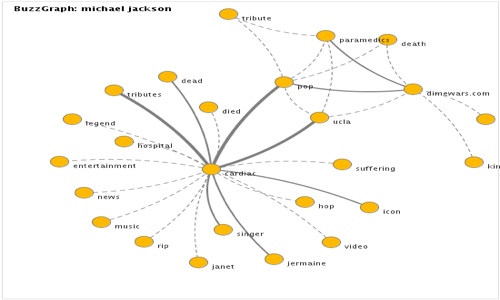