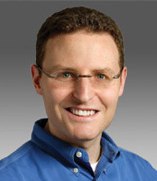 While Ebersman worked at biotechnology company Genentech for 15 years, his experience was on the business side. He rose through the ranks as a business analyst and product manager before becoming chief financial officer in 2006 through its sale to Roche this past spring. This experience is what Facebook chief executive Mark Zuckerberg emphasized in the company press release today: “He was Genentech’s CFO while revenue tripled, and his success in scaling the finance organization of a fast growing company will be important to Facebook,” Zuckerberg said.

What revenue at Facebook? Using information obtained by ourselves and others, we’ve estimated that the company is on track to make at least $500 million this year. It only says that its revenue has been growing by 70 percent this year, and that it could be profitable in 2010. An aside in a New York Times article from April suggested that Yu wasn’t as bullish Zuckerberg, and left as a result:

Facebook said last month that it was on track to become profitable next year. But as it did, Gideon Yu, Facebook’s experienced chief financial officer, left the company. Three people familiar with the internal maneuverings at Facebook said Mr. Yu objected to such a rosy projection as the company was struggling to finance its expensive global growth.

The former treasurer at Yahoo and the former CFO at YouTube (he sold it to Google), Yu certainly had some public company experience. But Ebersman has more. Presumably, he liked what he saw at Facebook enough to join. The social network has stayed demure about doing an initial public offering; from what I’ve heard, its plan is basically working. It gets more users, gets them to share more information, uses data about what they share to target ads better — and as long as it can get people sharing even more, it can serve those ads more often. It’s not a sexy, short-term plan but for Ebersman, who grinded out a big success with Genetech over one and a half decades, it must seem like a good one.

Ebersman will report to Chief Executive Officer (CEO) and Founder Mark Zuckerberg.  He will oversee Facebook’s finance, accounting, investor relations, and real estate functions.  He also becomes a part of the company’s executive management team, which directs all aspects of company strategy, planning and operations.  Ebersman will formally start in September 2009.

“We received a lot of interest in the CFO position and had the opportunity to meet with many impressive candidates,” said Mark Zuckerberg.  “We quickly recognized that David was the right person for Facebook.  He was Genentech’s CFO while revenue tripled, and his success in scaling the finance organization of a fast growing company will be important to Facebook.”

“After meeting with Mark and the rest of the team, I was thoroughly impressed with everyone’s drive and sense of purpose to help people connect and share,“ noted Ebersman.  “Mark is constantly pushing the company forward and he’s assembled a world-class team that is achieving remarkable results both for its users and as a business.  I’m excited to join this effort and this new industry.”

Ebersman worked at Genentech for nearly 15 years. He served as the firm’s executive vice president and CFO from 2006 through April 2009, when Roche Group acquired the company.  Prior to joining the company’s finance organization, he was senior vice president of Product Operations.  He joined Genentech as a business development analyst.  Previously, he was a research analyst at Oppenheimer & Company Inc.