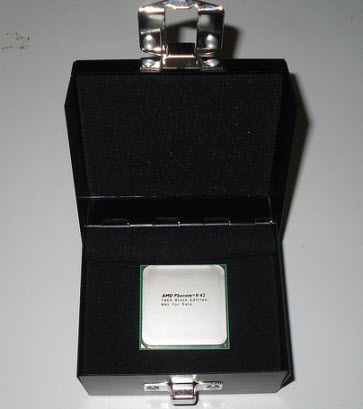 Advanced Micro Devices’ latest microprocessor is so rare you can’t even buy one.

The AMD Phenom II X4 42 Black Edition TWKR processor is available today. But not for you. AMD is making only 100 of these chips for super geeks known as “extreme overclockers.” That is, they’re made for people who’ll run the chips as fast as possible, using supercooling method to keep them from melting down. AMD has been doing this for months now, since it launched its fast processors earlier this year. Each time it launches a slightly faster chip, it makes a big deal out of it.

It’s a weird and expensive hobby, but someone has to do it. Overclockers are most common in the gaming community, where running a game faster than you could possibly want to play it is kind of a badge of honor. For a nanosecond, these new chips will give AMD the bragging rights of having the fastest processors in the world. Intel hasn’t really answered AMD in a while in terms of launching a slightly faster processor. But bragging rights, of course, don’t have a lot to do with sales. Intel is still king on that front.

AMD is giving the chips to some serious overclocking experts to give
both the experts and the chips some attention. In turn, they’ll brag about them and spread the good word among mainstream gamers, who are the targets AMD really wants to capture. And remember, kids, don’t try what these guys do in the video at home. Unless you want to set your house on fire.