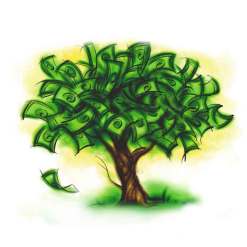 The big story a couple of months ago was that cleantech investing had fallen off a cliff in the first quarter — signaling what many feared would be a prolonged negative trend in the sector. But it looks like things have started to turn around, with new data showing that $1.2 billion has already been sunk into green technology across 85 deals since the beginning of the second quarter.

To give you some context, the first quarter this year saw only 59 deals, amounting to $836 million. So while the space isn’t exactly roaring back to life, the rebound bodes well for the rest of the year as the downturn continues to ease.

Solar power commanded the most, bringing in $330 million in investments, but wasn’t as far of a front runner as it has been in the past. The second quarter saw more support for automotive applications, for example (a little above $202 million), and a sizable chunk ($195 million) went to biofuels and cleaner coal innovations. Surprisingly, batteries came in fourth with $181.5 million — but that is sure to grow with all the emphasis placed on the area by the administration and powerful car companies. Oddly, the report breaking down this data released by Greentech Media, combined wind and geothermal sources of energy, a space that only garnered $22.2 million even though wind is usually spotlit as the number two renewable energy source behind solar.

So what turned things around? Many analysts thought cleantech investing would take a year or more to grow back. But it looks like the federal stimulus package, with its generous allocations for green technology, has worked its magic before any money is even handed out. Many companies, across all categories, have employed a clever “wait and see” strategy with investors, swearing up and down that business will explode as soon as the stimulus funds jumpstart lagging production schedules and capital expenditure projects. And it looks like VC firms agree. It’s rare for a firm’s portfolio companies to get a major cash infusion that doesn’t dilute their holdings — it must seem like an opportunity that is too good to pass up.

That being said, investing has not come in the same shape and size that it has in the past. Early-stage startups have benefited significantly in the last quarter, mostly because investors are trying to get them in shape to qualify for government support. Similarly, late-stage companies have had an easier time finding financing, arguing that government funds could push them to profitability and even to public offerings. That leaves mid-size startups, which have still had a trying time finding backers, according to Greentech’s analysis. On top of that, the average amount given to any of these companies has gone down — with no firm giving $100 million or more to solar or biofuel operations, even though those are the two areas where large sums are needed the most for factories and the like. These companies will still need to wait for September’s government cash drop to realize larger-scale progress.

Regardless, it looks like the sun has come out for cleantech after a rather gloomy six months. Back in April, when the situation looked the most dire, we reported that Mark Heesen, president of the National Venture Capital Association, predicted cleantech would top venture capital within five years. We got some skeptical feedback from readers who clearly agreed with the market’s mayday attitude. But if things continue on this upward trajectory, Heesen might not be far off.

Here’s a full breakdown of the $1.2 billion by sector: 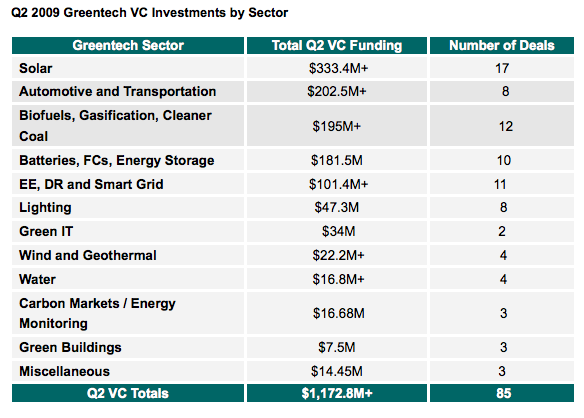