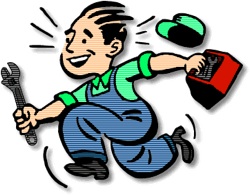 Those of you who get uncomfortable around confrontations and arguments may be able to breathe a little easier now — it looks like Google has resolved a recent spat between the search giant and Microsoft peaceably, with a bug fix.

The trouble started when Google announced it was allowing users of its Google Apps bundle of online tools to synchronize those services with Microsoft’s email/contacts/calendar program Outlook. It seemed like a good way to encourage companies to try Apps without necessarily giving up Outlook. Not so fast, Microsoft said — a “serious bug/flaw” in the Apps Sync feature broke Outlook’s search capabilities. Then Google responded that Outlook search still worked fine, thank you very much, and that the problem was with another product, Windows Desktop Search.

I’m not an Outlook user, so I’m not sure how big an issue this was for most users. I certainly suspect that most of the press coverage had more to do with the drama of watching Microsoft and Google make (pretty minor) swipes at each other. And regardless of how bad the bug was, Google now says it has been fixed, so Outlook/Apps users can search their emails with the normal Outlook search feature, or Windows Desktop Search. Windows Live Hotmail’s integration with Outlook has been fixed, too.