Meebo is taking another big step towards making its instant messaging service profitable. It’s officially launching a new product that runs interactive pop-out ads within its IM toolbar available on partner sites. You might be on a racing site, for example, chatting with friends about car models, and you’ll see an ad for Toyota’s Prius — with AT&T, it’s one of the two marquee advertisers now using the service.

The toolbar ads were first announced in March, and intend to build off of Meebo’s recent successes with getting other sites to use the toolbar as well as selling similar advertising on its own site. Based on its user and revenue growth, it expects to be profitable sometime next year, I hear from a source close to the company.

In case you’re not familiar, Meebo’s home site lets you log in and chat across multiple IM networks, including AOL’s AIM, Google’s Gtalk, Yahoo Messenger, Facebook, MySpace, and more. The toolbar lets other web sites add a small pane at the bottom of their web pages; people on those sites, including social networks like MyYearbook, can either chat with friends on those sites or with their friends on the other IM services they’ve tied in with Meebo. Earlier this month, these users also got the option to share links they see on sites back to social networks like Facebook and Twitter. 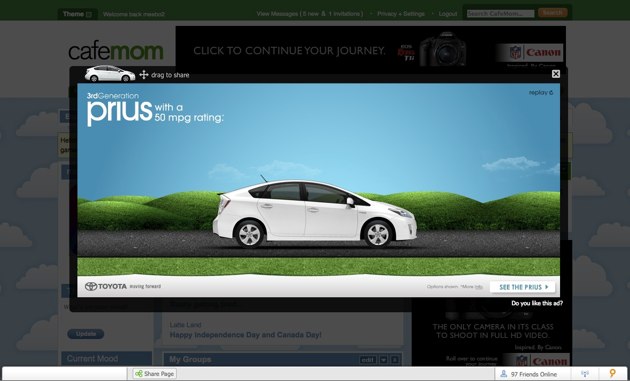 So far, 85 partner sites have signed up for the toolbar, and 40 are live. Around 15 million people are exposed to the bar through these sites every month, with about 20 percent of them using it. Including that 15 million, as well as traffic on Meebo’s home site and other widgets, the company claims to reach more than 50 million people. As more sites turn on the toolbar, it expects the number to climb by more than 40 million.

Meanwhile, Meebo has been running similar ads on its home site. They appear on the home site’s toolbar — and now on partner site’s toolbar, and when you mouse over them a 900 by 400 pixel screen opens that displays a video or other interactive advertising. The ads can be targeted to users based on age, gender and relevant interests. Meebo says these ads see an average of one minute of time get a 10 times higher click-through rate than traditional online banner sites on social media sites. Meebo expects the toolbar ads to eventually reach more than 100 million people. Note that Meebo counts all users of its partner sites in its 50 million and 100 million numbers — as all these users will have to see the toolbar and the ads, whether they use it or not.