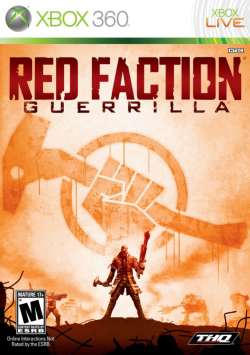 If there's one thing that you can appreciate about Red Faction: Guerrilla, it's for cutting the shit and getting right to the point. It's unlikely that you'll be enthralled by the dime-a-dozen plot line, and the graphics won't make your eyes water, but for the team at Volition, that is completely missing the point. RF:G is about fun, and of that, there is tons to be had. It's actually a pretty refreshing breath of fresh air – RF:G doesn't take itself seriously, and doesn't expect you to either. It's the equivalent of a good Arnold movie – it's not going to win any Oscars, but one can hardly stop to care when there's this many explosions.

Yes, Red Faction is back, with some significant changes. It has become a third-person, open-world game, but other than that, it's got the same Red Faction feel. The fight is back on Mars, 50 years after the events of the first Red Faction. Revolution is in the air amongst the planet's miners yet again, and your character, Alan Mason, finds himself unwittingly at the center of it. Through a variety of missions, your goal is to raise moral of your fellow miners and take control of Mars back from the oppressive regime of the EDF.

How you do this is more or less up to you – but it usually involves a lot of destruction. RF:G does a good job of keeping the missions varied, occasionally stumbling into cliche sandbox territory where you can't help but feel Volition felt the need to adhere to what the genre has come to expect. This is especially evident in "transporter" missions, where the player has to drive a vehicle from point A to point B, resulting in rather dull and segmented gameplay. Despite this, the majority of missions are a blast, and you'll find yourself seeking out each one just to have experienced them all. Destruction missions are particularly enjoyable – the player is given simply a building, a limited amount of weapon selection (sometimes as much as three bullets from a pistol), and an objective to destroy the building. That's right: even the puzzles in this game explode.

Indeed, the real star of RF:G is the new "Geo-mod" system, a new take on the enginefrom RF1. In RF1, absolutely anything could crumble, but there was no physics engine to the buildings. In RF:G, you aren't allowed to tunnel through the ground, but pretty much everything else begs to be destroyed. Each building on RF:G's Mars is governed by a stress system crafted fromthe ground up by Volition, and the result truly is satisfying. To level a building for the first time by clearing out the supports on three sides and watching the weight slowly shift enough such that the whole thing collapses is truly an experience to behold. The fact that absolutely nothing is pre-rendered when you blow a whole into a building leads to some extremely interesting and fun scenarios.

And really, that's what this game is all about. One could write a novel by the time the game is over with all the ridiculous, over-the-top, and unbelievable things that happen in a typical RF:G single player campaign. Volition does a nice job of slowly increasing the volume of destruction throughout the single player by introducing new weapons along the way, which can be bought using salvage. Salvage is the economy of Mars, and is obtained by completing missions and – you guessed it – destroying buildings. A noticeable lack of polish in some areas can mar the experience a bit – a few times I had mission-ending glitches occur, and often I'd stumble into an invisible wall when trying to jetpack over a mountain. Retrying a mission is inexplicably difficult. It's possible that Volition will patch these problems in the future, but as they are, they remain only minor annoyances. By and large, the single player is an absolute thrill.

The multiplayer is also very fleshed out this time around, with several online modes and an offline mode (in which you hand off the controller causing as much destruction as possible…no, really). Exclusive to multiplayer are backpacks, which act something like perks you might get in CoD if you were a superhero. One backpack lets you see through walls, another allows you to create an earthquake around you, and of course, the jetpack is there as well. Backpacks are littered across each map and can be swapped at any time. The combination of these backpacks with different weapons is half the fun of the multiplayer, and once again, creates simply outrageous scenarios that are an absolute blast to experience. All the destruction is still there, and Volition has crafted some interesting game modes around their geo-mod engine. One mode, titled Siege, tasks one team with destroying a host of buildings the other team has set out to defend. Once the round is over, the teams switch places. The matchmaking system, and the lobby in general could use some work, but Volition has promised improvements to this interface. If they deliver, RF:G sports gameplay robust enough to compete with the best.

For all the content that Volition has packed into Red Faction: Guerilla, it's amazing there isn't more frills and more ribbons around the box. They've clearly spent a lot of time and effort to fill this game with as much raw fun as humanly possible. It's unlikely that RF:G will take home any GotY awards, but it's certainly a surprise and one of the best games of the summer. It's the kind of game where a description of the carnage simply won't do it justice – and if that's not an indication of a great game, then I just don't know what is.