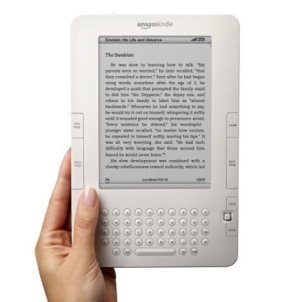 Amazon is stealing a march on the nascent e-reader market with its Kindle device in the U.S. But as new e-readers enter the market in Europe — just today, Borders launched its eBook product in the UK, made by Elonex — Amazon seems to be missing an opportunity by not extending the Kindle to Europe.

Analyst firm  Cowen & Co. estimates that the online retailer has sold 800,000 Kindles to date, and that by 2013 it will have penetrated 10 percent of its customer base, or 2 percent of the U.S. population. Primary competitor Sony, has been hush hush about how many of its digital readers it has sold — last reporting 300,000 in December 2008.

But for a company that has reaped big rewards from its international business (Amazon made $2.31 billion in revenue outside the U.S. in the first quarter, accounting for nearly half its overall sales), it seems pretty slow to the punch on pushing the Kindle out to foreign markets.

This week saw the latest story around Kindle’s delays in Europe: Germany, the biggest book market in the region, will not be seeing the Kindle anytime soon because of a breakdown in negotiations between Amazon and the country’s two leading wireless carriers, T-Mobile and Vodafone, according to reports on the German WirtschaftsWoche.

Apparently, the carriers have been wrangling with Amazon over charges for the Whispernet service — the wireless connection that delivers books and other content directly to users’ Kindles.

Amazon has a chance to be groundbreaking in Europe. Whispernet is based on a wholesale deal with Sprint. The connectivity works in the background to update the device when not connected to the Internet at a user’s home or office, and it means that users get that Whispernet service without getting billed separately for it. Wholesaling the wireless data and bundling it with a device is a great idea, and one that — if it catches on — could provide entree for other players in the space: if the price of mobile data is one of the things that puts people off using wireless content and services, then why not get rid of this part of the equation altogether and bundle the price into the device?

“The user is effectively oblivious that this works through the mobile phone network,” says Mike Grant, a partner at Analysys Mason. “We will see a lot more of that coming along, this kind of service-based concept.”

But even if users are being alleviated of some wireless headaches, Amazon isn’t: As it is now, the Kindle device has been built to run over Sprint’s CDMA-based network, but the networks in Europe use a different standard, WCDMA, which is used by AT&T and T-Mobile. “It’s not impossible to swap out hardware and replace the radios and all the support on the global network, but it’s a lot of work,” says Ian Fogg, an analyst at Forrester. “If handset companies like Nokia find it hard to create compelling products on CDMA, it clearly will be a challenge for companies like Amazon to do this [in the other direction].”

There is the option of using the device over WiFi — an idea mentioned by Amazon.co.uk’s managing director Brian McBride (who was the managing director of T-Mobile in the U.K. previously) in an interview with The Bookseller last October. But this too presents a “minefield” of operators for negotiations, he says. Plus Wi-Fi generally wouldn’t present the seamless kind of coverage that cellular networks could.

Europe’s many national boundaries, and the data roaming charges that go along with them, are another issue. This month, these charges came down to 1 euro per megabyte, but this is still significantly more than what operators charge domestically. And this is surely also playing a role in the holdup with mobile operators.

“Amazon wouldn’t find it easy to launch [the Kindle] in the U.K. and not have it work in a neighboring country,” says Fogg. “They could do it, of course, but it would damage the proposition.”

But with more e-reader devices coming onto the market, and a growing catalog of content to read on them, the question is, will delaying the Kindle any longer prove even more damaging?