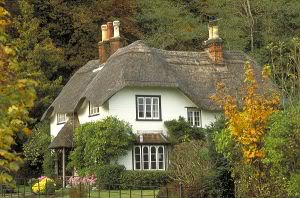 I took a little detour last week during my vacation to the United Kingdom. After a few days of hustle and bustle in the ginormous capital city of London, I thought it’d be a good idea to take a train trip up north to check out a tiny village my ancestors called home 500 years ago. And as I wandered about this hamlet trapped in time with its thatched roofs, guildhall, and ancient church, an unexpected gaming-related thought struck me out of nowhere:

“Man, this would make a great RPG village!”

Unfortunately, good luck actually seeing it in a game. I’ve mentioned in the past that I have a problem with Western developers shunning our own tales and legends in favor of made-up fantasy lands — a problem Japanese developers don’t seem to share. Well, I have an even bigger problem with Western developers ignoring our own real-life locales. Sure, you won’t find a shortage of games that take place in the real world. But a certain theme emerges when you examine these titles a little more closely. The Getaway. Gangs of London. The Godfather. True Crime: Streets of LA.

Sure, it may feel good to be a gangster, but that doesn’t mean I always wanna play as one. Why don’t we see more diverse Western settings and casts of characters when a game takes place in the real world? One of the few examples I can think of is the early PS2 title Shadow of Destiny, which features the player time-traveling from the Middle Ages to modern times in a real-life German city. And what famed Western developer came up with this novel idea?

And outside of hardcore PC strategy games, Western developers even shun incredible real-life conflicts in favor of made-up strife between orcs and elves. Jeanne d’Arc? Bladestorm? Both revolve around the epic Hundred Years’ War between England and France. But they’re both Japanese-developed.

On my taxi trip from the train station out to the country, my cabbie told me that most UK citizens felt they had to travel to “exotic” overseas locales to see impressive sights, when in fact, there was plenty to see right around them that they didn’t take the time to appreciate. I think Western game developers suffer from the same myopia. You don’t always have to come up with a fantasyland from scratch — sometimes, inspiration’s closer than you think.