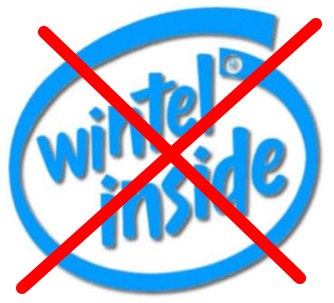 Google thinks it can use the web and all of its efficiencies to challenge Microsoft. Now, it turns out that the crack in Microsoft’s armor will also make Intel vulnerable, threatening to unravel the Wintel duopoly that has dominated computing since the 1980s.

Tonight, Google announced that Chrome OS, its new operating system, will run on computers with either x86-based or ARM-based chips. No longer will Intel have the monopoly on chips that are at the heart of a personal computer, particularly as netbooks — the smaller-than-laptop web-focused computers that are Google’s initial target with Chrome OS — become a bigger part of the market.

ARM, which is supported by a whole consortium of chip design and manufacturing firms, has always had an advantage over Intel as a low-power architecture. ARM chips are smaller, they don’t try to do as much, and consequently they throw off less heat. That makes them ideal for tiny devices such as cell phones, where power usage is more of a concern than performance.

Intel has argued that cell phones such as Apple’s iPhone show that phones are turning into small computers, so it only makes sense to put Intel’s x86 microprocessors into those chips. Intel is working with Nokia on an interesting new set of mobile Internet devices that will use Intel’s future Atom microprocessors. Those are low-power versions of Intel’s processors. It’s not clear when those devices will hit the market.

Meanwhile, Google’s maneuver tonight shows that ARM can march in the other direction. As netbooks shrink and require low-power technology to conserve battery life, the ARM-based chips may be more appropriate in the smallest computers.

Before, the need to run Microsoft’s Windows was a huge barrier to ARM. But Microsoft is reportedly working on software for the future (not the upcoming Windows 7) that will run on ARM chips. And while Apple is using Intel chips in its Mac computers, Apple is also designing its own microprocessors for unknown future products. How’s that for stabbing Intel in the back?

Actually, it’s clear that we have a free-for-all developing. Technologies such as virtualization software, which have a layer of translation built into them, mean that just about any software can run on just about any hardware. We aren’t there yet, but that reality is coming.

Intel is also protecting itself by developing the Linux-based Moblin operating system for netbooks. But the problem for Intel is that it is used to developing chips that sell for anywhere from $50 to $1,000, with the sweet spot around the $150 price. As ARM-based computers enter the computer market, we’ll see prices crater. The ARM-based chip makers are quite often happy to get $10 a chip. So Intel has a lot more profit margin to lose as it dives into the commodity fight for cell phones and tries to defend its turf in PCs.