I grabbed Megaman ZX with an urge to indulge in some Megaman joy – unfortunately, I was the only person involved in the game who’d even heard of "enjoyment." In fact, I might be the only one who’d played Megaman. Capcom (now actively working to make sure they don’t have successful characters) sourced the game out to Inti Creates – who couldn’t have placed more obstacles between me and fun without designing the cartridge to blow my thumbs off. 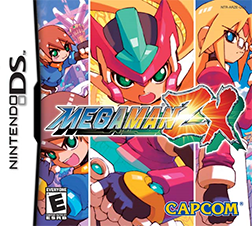 Some things just don’t need extras: wheels don’t need spinners, drinks don’t need stupid little umbrellas, and for every body shaped like Milla Jovovich there’s some bastard designing clothes for her to wear. The "improvements" to Megaman made by ZX aren’t just fitting wheels to a tomato – they’re scooping out the pulp, ramming in an engine and balancing a spoiler on the back so that you’ve no vegetable left. And the new car sucks ass.

Specifically, screeching twelve-year-olds anime where the commander of the Guardian forces, defending humanity from "Maverick" robots, wears more layers of pink coat than weapons. I’ll allow this because it lets me skip it with the start button, and because I know that if I still want Megaman when I’m in the nursing home they have to attract players who can’t hum the A-Team theme.

Talking To EVERYONE in the WORLD

The only speech in a Megaman game is Dr Wily begging for his life after I’ve blown up everything he owns. ZX has you dig through three War and Peaces before you even get to turn your gun on, and here’s a message for you, Inti Creates: When you have TWO SCREENS, you do not need to ticker-tick pages of text through a tiny two-line panel designed for "You Got The Guts Blaster!" If I’m hammering the B button it should be because I’m blasting Bombman, not doing battle with the Interminably Atrocious Dialague Squad.

Believe me when I tell you that the Guardians make Final Fantasy’s City Guards look like masterpieces of characterization. Compared to these guys the average innkeeper is Hamlet undercover. You’ve got the girl, the tough loner, the inventor, the fact this sentence took three cups of coffee and pounding a nail through my foot to get through without falling asleep at the memory. And the developers include special files – disks you can collect and read, in case the rich narrative layers a old man with a beard liking science require further study.

By the time I finally got to choose a mission (a subjective ten million years into the game, including one entire goddamn session of playing hide and seek in a civilian area), I was told to go to area H-4. At that point may entire map went up to C-2. That’s it, good luck, off you go hunting for something that might maybe be the way to go – and that’s hunting through six areas so utterly uninspired they make an IKEA showroom look like Dr Wily’s castle. There’s a section in A where you just plain run for a solid minute, shooting one unshielded enemy every three screens of unbroken plain. It’s like they’d just loaded up the level editor and then accidentally printed it to the cartridge.

Did I say I was hunting for H-4? Only after being three paragraphs of unqualified garbage posing as motivation through the tiny text display. I’M MEGAMAN, ASSHOLES! I shoot anything moving and collect anything glowing, that is my ENTIRE DEAL. Bad guys, I’ve got a gun for an arm – just put me in the goddamn level and I’ll work it out! Adding more story is like hiring an orchestra to accompany you to the toilet: stupid, gets in the way, and extremely awkward for all concerned.

The Action-Packed Tempo Of A Dead Monk

Making it to the H-block after a moderately endless trek through fourteen million miles of level, maybe ten grunt enemies, and a jump or two (I made sure to enjoy the novelty), I got my ass killed in H-3. I was knocked off a floating platform into an instant-death pit by a flying enemy, and it’ll tell you how pissed I was by this point that this was the BEST bit. This cheap shot death made me happy, truly happy, because for a single instant it was like somebody involved had actually played Mega Man! Or maybe seen someone play it through the window of whatever fabric store most Inti Creates employees spend their time in.

The game asked if I wanted to Continue. You bet your ass I do! I finally found a goddamn game in here!

Which is when I appeared back in the A-2 transporter, ten miles from the action because my random route through the Plains Of Boredom hadn’t included a closer one. The game expects me to, is in fact designed with the assumption that I will, trek all that way for every attempt at what was a piss-poor level to begin with.

I hit the off switch like I’d found it sniffing my crotch and pulled out the cartridge. Pulling it out the way you’d yank the wires from a bomb reading 0:01.

It’s a bloody tragedy. EA make approximately one zillion dollars changing the name list in all their sports games each year, ripping off millions of players. In Megaman changing the names is all you need for a new game! That’s actually all you have to do and I will gladly pay you fifty dollars a year for the rest of my life!  If you’d told me a game where you get the mega buster and the Zero sword right off the bat could be bad, I’d have killed you just in case it was your observation that quantum mechanically made it so!

Instead we get all the very worst parts of RPGs vomited over an empty shell which maybe has a platform or two in it.

(FULL DISCLOSURE: Yes, I eventually cracked and tried it some more. No, it did not get better, and since I wish I’d quit when I claimed to I now stand by that version of events.)