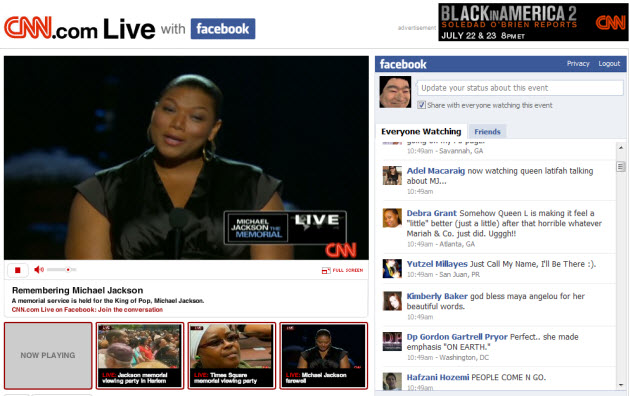 Like millions of others, I tuned in at 10 am Pacific time to watch the Michael Jackson memorial service, live over the web. While I wanted to share the experience and remember MJ, I also wanted to see how the Internet held up under the weight of so much video traffic.

After a few seconds of video, the picture on CNN.com stalled. Clearly, the site was choking. But viewers seemed to be having fun with the Facebook widget, which let them post status updates and watch the short messages scroll by alongside the video on the CNN web site. They were sending messages expressing marvel at the real-time conversation happening among people from around the world. CNN said hundreds of thousands of people were logged into the Facebook widget and 6,000 status updates were coming in every minute. That was more than during the Obama inauguration.

I cut over to Hulu.com, which showed me a 30-second video ad before starting. They were on commentary, so I switched to Justin.tv, which handled the live streaming for E! Online. The sites seemed to be handling the traffic well, but my sense is they flowed even smoother once it was clear the ceremonies were delayed.

Smoky Robinson came on stage to talk (apparently reading condolence letters from singer Diana Ross and statesman Nelson Mandela). The crowd applauded when the family came in. Then the audio cut out from Staples Center. We couldn’t hear anything. The commentators said Jesse Jackson, Kobe Bryant, Brooke Shields, Robert Townsend and a host of other celebrities were spotted inside.

The TV networks managed to get people to tune in early by running live video of MJ’s motorcade moving down a completely cleared Los Angeles freeway (filmed from helicopters). Inside the darkened Staples Center, the crowd of 17,500 was silent, according to commentators.

Finally, the memorial service resumed at 10:35 am. A gospel choir came on and sang a song with the refrain, “We are going to see the king.” Jackson’s pastor Lucious Smith came on and said, “We come together in this space where only days ago Michael sang and dance and brought his joy as only Michael could.” Singer Mariah Carey came out on stage next and sang “I’ll Be There,” accompanied by Trey Lorenz. CNN briefly cut out of the song and then returned to it, for an unknown reason. On Facebook, snarky and sentimenal comments rolled by. Many said they were crying. Another said, “Thank God she had Trey. He saved her performance.”

Queen Latifah reminisced about how she tried to repeat the moves of the Jackson Five. She said, “Michael was the greatest entertainer that ever lived.” On Facebook, people echoed the comment.

Keynote Systems, which monitors the performance of major news web sites, said it did see some slowdowns among the sites that it monitors on a regular basis. But it said the Internet appeared to function OK. Ustream said that it served 4.6 million video streams from around the world in partnership with CBS. Ustream said that viewers participating in the chat rooms left 12,000 messages per minute.