I have been trying to write my review of "Ghostbusters" for Wii for quite some time, in one way or another. Part of that was just finding the drive to finish the game, something I have yet to do. I doubt I will. Though there is nothing particularly wrong with it, it’s just not a terribly interesting experience. I simply feel no desire to continue playing.

"Ghostbusters," or as the PR people would put it, "Ghostbusters®: The Video Game," is a followup of sorts to the Ghostbusters movies from the 80s. If you don’t know what that is, you should probably just stop reading now. This game was built assuming that you thought Ghostbusters was awesome as a child and continued to be funny as an adult, and being unfamiliar with the source material would remove the only reason to pay attention to this already unremarkable game. 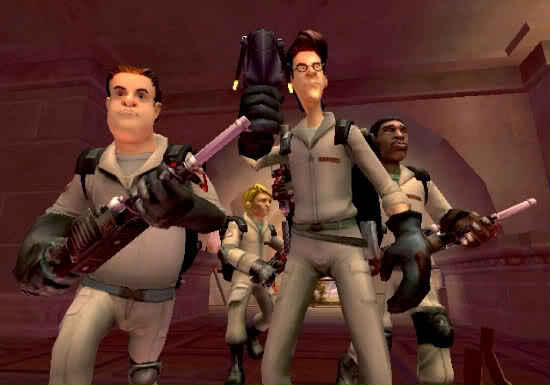 The game takes place a few years after "Ghostbusters II." You are a new hire, which allows all the famous characters to keep referring to you as "chief" and "the rookie" instead of giving your character an identity. You run around various locations in Manhattan, using the sweet proton pack laser beams on various ectoplasmic baddies. The controls are basically that of a first person shooter, and the default setup works fine. Good thing, too, as there are no customizable controls. (This game is no "Conduit," thank god.)

Combat basically consists of blasting ghosts enough to either destroy them or tire them out enough for you to "wrangle" them into those sweet traps that you also wanted the toy of as a kid. There are plenty of variations on this, including tossing various things around gravity gun style, as well as new attachments (read: kinds of guns) for your proton pack. In between fights, you use your PKE meter to sniff out ghosts, as well as other Metroid Prime scan visor-type activities. There are entries in "Tobin’s Spirit Guide" for every enemy in the game, and the combination of depth and serious tone present throughout is quite amusing. 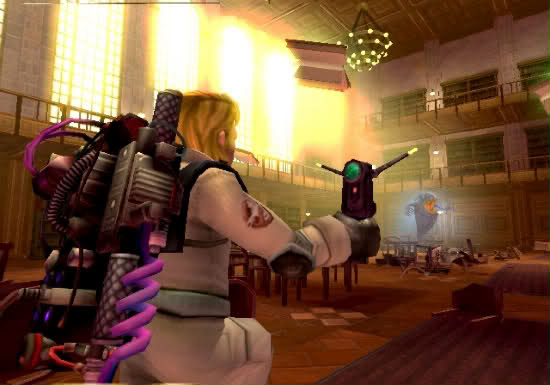 One issue I had is that the basic beam doesn’t really feel like it’s hitting anything when you actually hit your target. A health meter starts to tick down, but there is no visible reaction otherwise. It’s especially jarring because the environment is awesomely destructible. Overall, the combat isn’t quite as engaging as you’d like it to be, but it never really gets annoying or overly difficult, and it would be worth putting up with if the rest of the game was great.

It, unfortunately, is not. Dan Aykroyd’s script is wasted on cutscene directing and editing that could be called horribly pedestrian at best, and at worst, simply bad. Either way, it’s not good. Don’t get me wrong, it elicits a chuckle here and there, and it is indeed a pleasure to see these characters doing stuff again, but timing is a huge part of comedy, and, from what I saw, this game largely fails at it.

I have a feeling Mr. Aykroyd was not prepared for the amount of dialogue necessary for an entire video game, nor does he understand how it should fit into the game. There are one or two movie-type scripted scenes in between each level, and then it’s largely all incidental "over there, kid!" type dialogue until the end each of section of the level, where you are treated to 10-15 seconds of exposition followed by more of you and one other character running around bustin’ ghosts. Basically, there is very little interesting dialogue during gameplay, which is unfortunate, because game writing is at its best when it actually involves the "game" part.

I don’t mean to sound so negative – it’s not terrible. It’s just not good. The good parts are these:

Unfortunately, it basically boils down to it being just about the sum of its parts. Mediocre script + okay combat and mechanics + decent graphics = unexciting game.
Note: This review originally appeared at Nintendorks.com. I write there too!