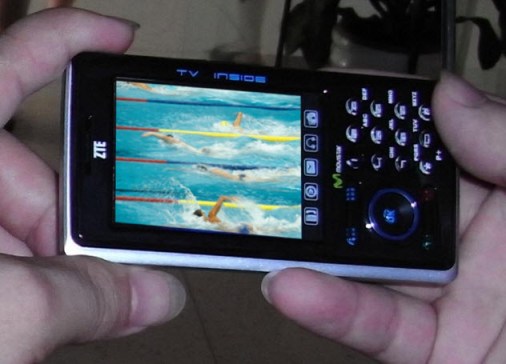 There are tens of millions of cell phones around the world that can get TV reception, thanks to Telegent Systems. The Sunnyvale, Calif.-based chip design company is announcing today that four more Latin American cell phone companies have launched phones with Telegent’s chips in them.

Mobile TV is a phenomenon that has taken off outside the U.S. In countries where people can’t afford TVs or computers, the next best thing is watching analog TV on a cell phone. In China, for instance, the excitement over the Olympics drove interest in mobile TV.

The latest customers include Telcel in Mexico, Claro Argentina, Comcel Colombia, and Movistar in Mexico and Peru. Each has now deployed multiple phones with the Telegent-enabled free broadcast TV programs.

Telegent has been profitable for  more than a year and now employs 200 people. The company has enjoyed its rapid growth even though it lives under the shadow of much larger rivals such as Qualcomm.

It has done so because it began with the right technology. In 2004, Weijie Yun and Sam Shen, a couple of serial entrepreneurs, founded a company that had the ability to integrate two different kinds of chips into a single one. They could combine a radio with a digital signal processor, which processes real world data such as TV signals.

At the time, Apple’s iPod was taking off and there were lots of companies doing audio chips. So Telegent went after a more difficult market: creating video chips with radio capability. They succeeded in shrinking the innards of an entire TV onto a sliver of silicon half the size of a dime. They also focused on making the chips run on very little power.

“We identified the bottleneck, and then went to the drawing board on how to solve that problem,” Yun said in an interview.

The entire solution, including the chip and its packaging, costs less than $10. The company launched its first TV chip for mobile phones in April 2007, with carriers in China and Southeast Asia picking it up first. Then it expanded to the Middle East, Africa and Latin America.

Now it has launched hybrid analog/digital TV chips and is moving on to even more difficult video processing chips. Yun says these new chips can provide growth as countries add infrastructure to accommodate better mobile TV reception. Some makers of laptops and netbooks (smaller than laptops) are also starting to design the TV chips into their products.

The company raised more than $50 million in three rounds of financing. Telegent’s investors include New Enterprise Associates, Walden International, Index Ventures and Northern Light Venture Capital. Qualcomm has launched a rival digital TV cell phone chip as part of a system dubbed FLO TV. But carriers have to charge a monthly fee for the MediaFLO service. On top of that, the service isn’t available in all cities yet. So the number of digital chips sold is far smaller than Telegent’s tally of analog chips.

Carriers like the analog TV service because it increases customer satisfaction with their mobile phones and thereby reduces churn among subscribers. Claro Argentina, a carrier that sponsors the Argentinian soccer team, is promoting mobile TV as a good way to stay current on soccer games in the run up to the coming World Cup in 2010. Customer videos have shown that they can watch analog TV while in a plane over Jakarta, Indonesia, or while riding a bullet train in China. With that sort of gee-whiz fascination over its products, Telegent is in a very good spot.