Back in 1998 during our first startup, ViewPlus, my co-founder (and close friend) Jimmy Kim and I went through the usual hardships of begging for money from friends and family, digging into our piggy banks and signing up for credit cards like they were lotto tickets.

Once we were up and running, we made a commitment: To help other entrepreneurs whenever possible; to share our stories and advice; and to try to help them avoid the bumps and dead-ends we experienced.

I’ve gone through three startups now. I’ve raised over $49 million in venture capital and witnessed countless rejections from investors. I’ve gone through the joyous experience of raising too much capital, trying to do too much and target too many markets, facing corporate bankruptcy and closing our $7.5 million Series B at the last hour (which led us to the road of profitability). I’ve also raised too little capital when we could have raised more and suffered those consequences.

The following is a presentation I have given several times before focusing on the basics of the startup and raising capital process. 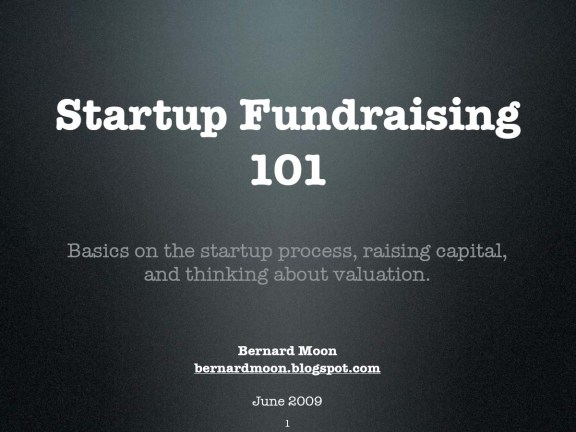 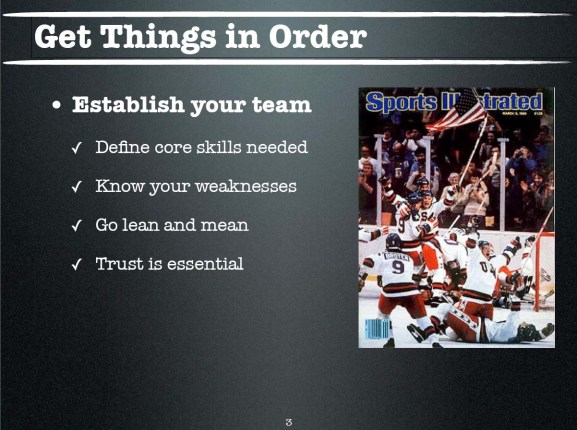 What sort of headcount do you need for Web startup?  Are two or three people enough? How about a new graphic chip company? Will five to seven people suffice? The trick is to research the competition and ask advice from experts. 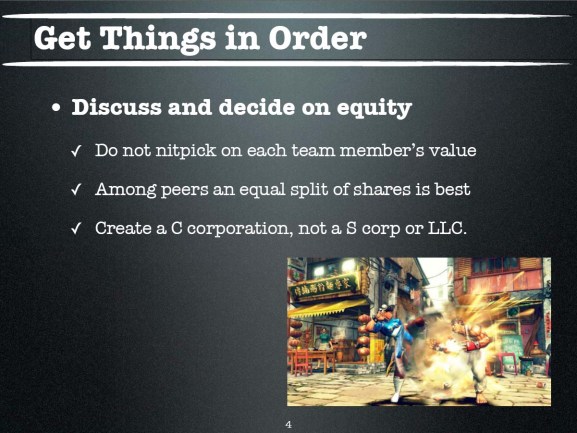 Get Things in Order

Bad team chemistry is the downfall of many startups.  If you don’t trust your partner and his or her skills, then don’t start the company with them.

Remember, too, that the equity split might be different among founders due to differences in experience, when each person joined full-time and significant IP creation. Just because you’re partners doesn’t mean a 50/50 split is the way to go. 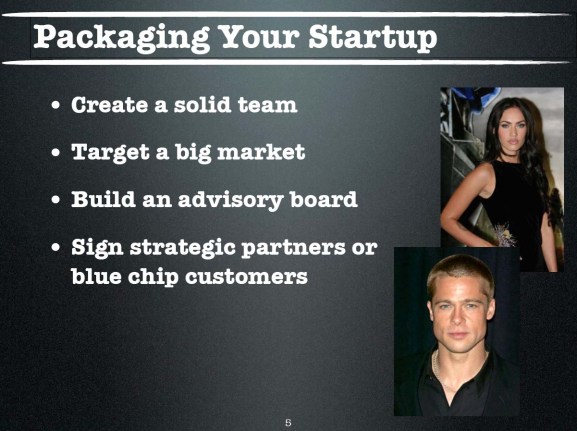 Megan Fox does not need an Armani dress to look good. She can go without makeup, wear sweats and an old painters cap and have men drooling.  Marc Andreessen has a similar effect in the VC world.

The rest of us (whether that’s first-time or regular entrepreneurs) need the full make-up job — with credible experts, big name executive advisors, top tier law firms and blue chip customers — to highlight us from the startup crowd.

Think through what your team needs to get things done.  If, for example, you’re a twenty-something manager at a record label starting an online music venture who still needs a wider network into the music industry, get a C-level music executive as an advisor to help you out. 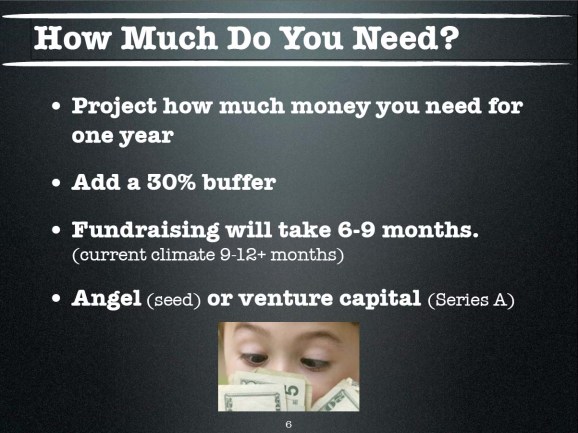 How Much Do You Need?

You can do a simple or detailed analysis of your expenditures for product/service development, salaries, general and administrative expenses and marketing. How deep you go with this is up to you – but the analysis needs to take place regardless.

Obviously, startup costs vary greatly depending on industry. Just remember to have enough runway to raise your next round and not lose momentum.  Also, expect unexpected costs. Adding a 30 percent buffer to your financial projection can be a lifesaver. 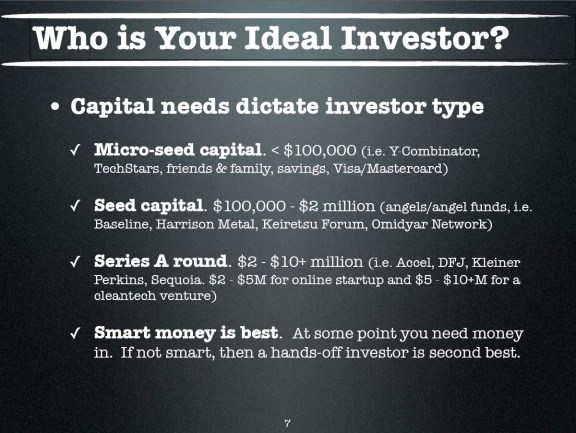 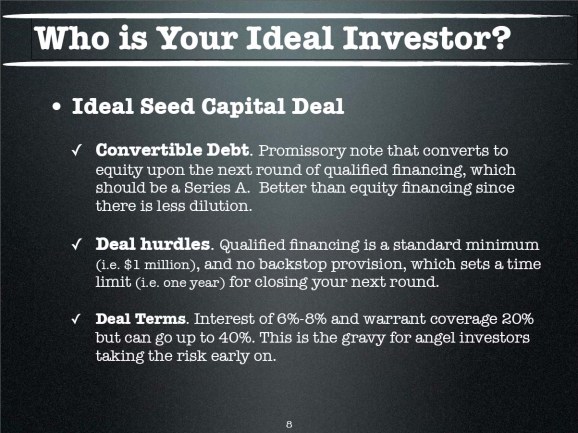 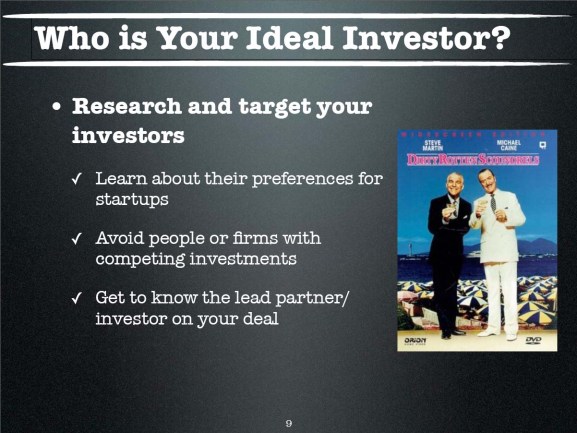 Who is Your Ideal Investor?

Some points are obvious.  Don’t pitch a VC that has never invested in online games if you are starting an online gaming company.

Research potential investor’s portfolio, too. Yes, it’s about the race to execution but why give your competitors intelligence?  I’ve had VCs who forgot to tell me about their competing investment, and I’ve seen their company take paragraphs directly from our business plan.  I’ve had a corporate VC meet and ask for our documents, then close an investment in our competitor three weeks later. Doesn’t due diligence alone take a few weeks?  “Shady” and “unethical” are not absent from the world of venture capital. 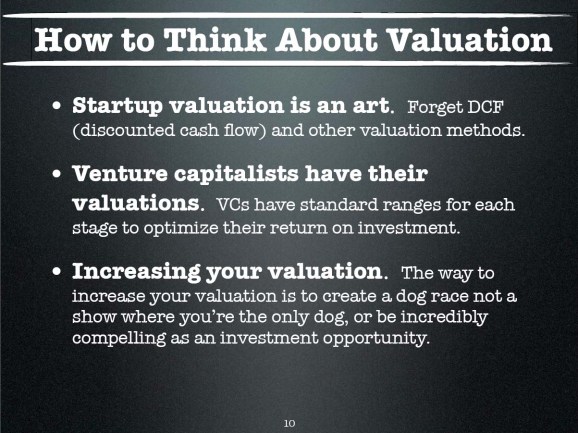 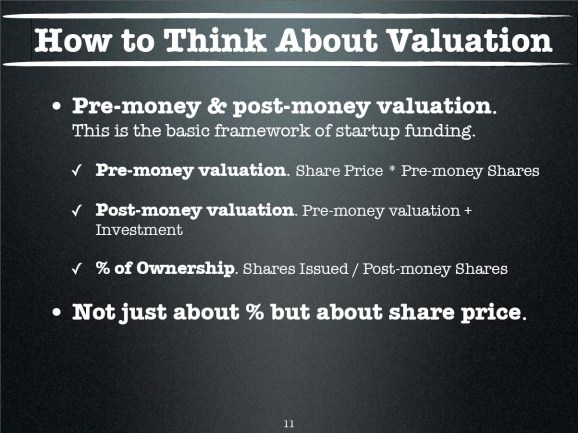 So you negotiate and agree upon a pre-money valuation of $4 million with some VC for their $2 million investment.  This means you have a post-money valuation of $6 million.  2 divided by 6 is 33.3 percent, so the founders gave up a third of their company. Keep a close eye on the math. 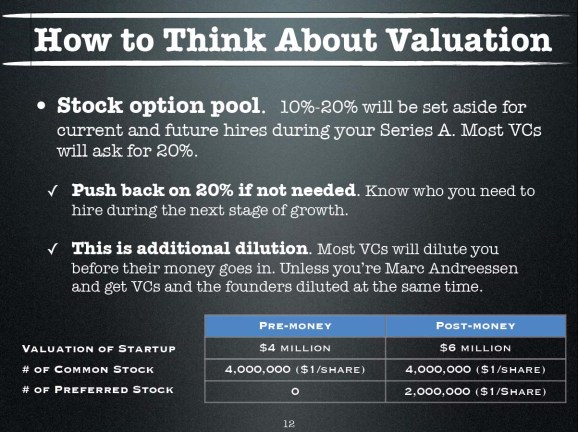 That dilution discussed above doesn’t stop at the 33 percent level, either. Most VCs will demand a 20 percent stock option pool. You can push back if you believe your company’s growth projections doesn’t warrant that amount of the pool, but it’s not easy.

Be aware of how your valuation is affected since most company shares are diluted before the new investors.  A 20 percent stock option pool here will create 1.2 million shares and an adjusted valuation of $4.8 million. If you’re Marc Andreessen, you can have 1.5 million new shares issued after the VC money comes in for the creation of a 20 percent stock option pool and an adjusted valuation of $7.5 million. 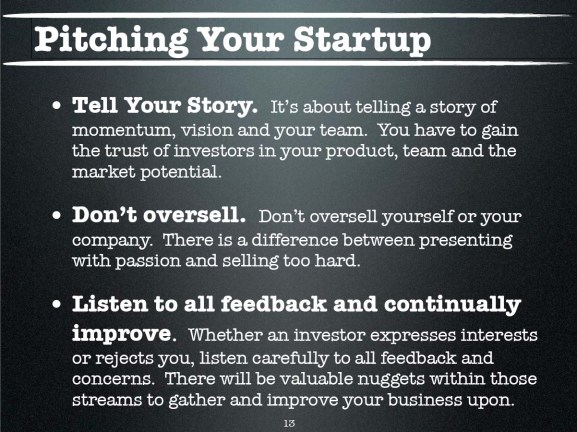 Sometimes it’s actually better to underpromise and overdeliver (especially in the early rounds) because the company is still developing.  Many successful startups change their business models mid-stream. Remember that good leadership recognizes when the ship needs to change course. Founders that don’t acknowledge this often find themselves back at port. 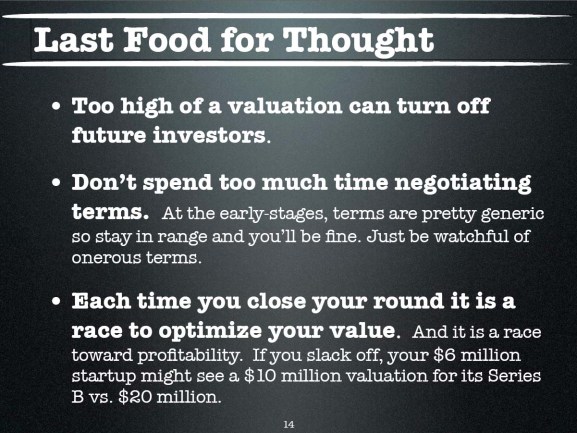 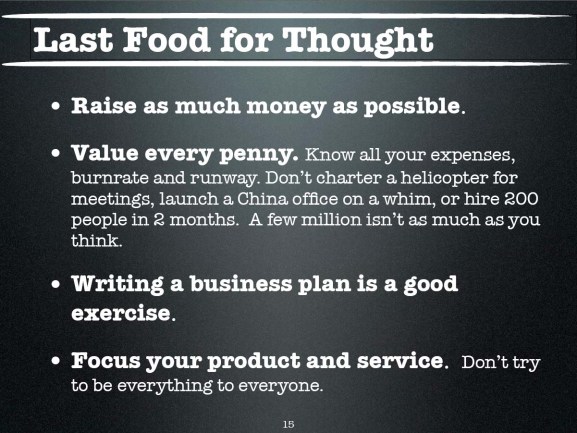 Regarding the first point, there are startups who turned away capital in early 2008 and when the economic collapse occurred they were wishing they had taken it.  Now they are looking at down rounds or closing shop.

That said, there is a dangerous gray area where startups can raise too much and get fat and unfocused. Just because you have the money, don’t veer off course.

A business plan is good on several levels. Initially, it helps develop your knowledge of your space, competitors and operational planning. It also helps you prepare for the fundraising future.

For most early-stage fundraising, you need a 10-20 slide deck, demo or live product (when relevant).  For capital-intensive startups (e.g. biodiesel, solar automobiles) and rounds after your Series A, then a business plan becomes essential to the fundraising process.