Venture capital fund-raising in the United States has dropped 63 percent at the six-month mark — the lowest it has been since 2003, according to a new report from Dow Jones Private Equity Analyst. 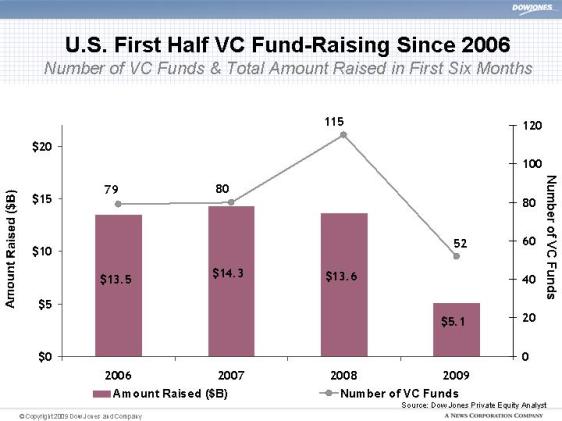 So far this year, 51 venture capital funds have raised $5.1 billion. Last year at this time, 115 funds had raised $13.6 billion. The report attributes the slide to declining liquidity, bottomed-out deal activity and the fact that more firms are focused on supporting current portfolio companies than raising new funds. The last reason is a function of the economic downturn, which has left many companies anticipating lucrative exits on venture life support for the foreseeable future.

Every fund has taken a hit, regardless of the size or type of their portfolio companies. Of the 51 funds, 32 were early-stage, raising $2.2 billion between them. Last year, 43 funds brought in $5.2 billion by this time. Thirteen multi-stage firms raised $2.3 billion so far this year, down from 21 firms and $5.7 billion last year. And seven late-stage funds raised only $561.1 million this year, versus $1.2 billion raised by eight funds last year.

Funds focused on technology and life science investing have felt the burn equally, the report states. New Enterprise Associates, an early-stage firm that straddles the information technology and and medical sectors, led the flock with $907 million for its eighth fund. This still falls far short of its $2.5 billion target.

“The often-repeated argument that the best companies are founded during recessions didn’t seem to hold much water with limited partners in the first half of the year,” says Jennifer Rossa, managing editor of Dow Jones Private Equity Analyst. 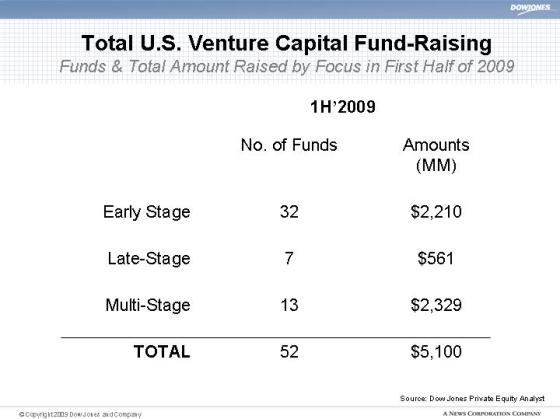 The publication’s report also examined private equity fund-raising, which is down 64 percent to $54.9 billion. With 173 funds raising equity, this is the worst they have performed since 2005. Not only have buyout firms petered out in the first half of the year (with fund-raising down 72 percent from 2008), but secondary funds are luring more and more investors looking for good deals — successfully raising $13.9 billion over the same period, the highest sum yet.

But the report also says private equity is poised to make a comeback once the stock market stabilizes — suggesting that secondary funds need to get while the getting’s good, because the tables will turn.

“It is clear that secondary fund managers are getting ready for some record deal-making,” Rossa says. “Once private equity firms start doing deals again, cash-conscious LPs are going to find it difficult to meet capital calls and will likely look to sell some of their private equity fund stakes to secondary buyers.”