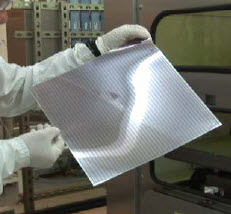 Kovio has raised $20 million in a fifth round of funding for its technology for printing chips in the same way that inkjets print on paper. If successful, the startup could create identification chips that are so cheap they could be placed on almost every product produced, just like the barcodes that have been around since 1974.

The funding from existing investors brings the total raised to date to $80 million. While it can’t yet make the most sophisticated chips, Kovio silicon printing platform uses a new way of manufacturing chips that could be useful in making the tiniest of chips even cheaper.

For its first market, the company is focusing on making barcode-replacement chips (radio frequency identification chips, or RFID), but the application of the technology could be much wider. The latest round of funding will be used to commence high-volume manufacturing of the Kovio RF Barcode chips, said Amir Mashkoori, chief executive of Milpitas, Calif.-based Kovio, in an interview.

The manufacturing technology owes its heritage to inkjet printing and is far different from the way chips are made today. In essence, it uses inkjets to spray chip features on top of stainless steel substrates in a way that is more eco-friendly than current methods. Normally, chip makers use a 12-week-long process where they run silicon wafers through a bunch of machines that treat the wafers with all sorts of chemicals.

Kovio is using the technology to reduce the cost of making the tiniest chips and the time it takes to make them. With the new spray-on method, chips could be finished in three to seven days, rather than 12 weeks. Kovio hopes it can make RFID tags for 3 cents each, compared to 20 cents each currently. At that price, the tags could be used on billions of devices, from transit tickets to cartons of milk. Consumers could then see a wide array of benefits, such as the ability to use phones to buy any product at the checkout counter. Cheap RFID chips is could also be used for much more reliable tracking of products — with data being shared across the Internet.

Like any giant bet, the technology has gone through a long development history. Kovio was founded in 2001 as a spin-0ff from the Massachusetts Institute of Technology’s Media Lab. The founders, including Kovio board member Joe Jacobson, were researching ways to manufacture flexible displays from printed technology. They switched gears in 2003 to make the silicon ink technology. It took several rounds of funding just to get all of the research done.

Mashkoori joined in 2006 to help commercialize the technology. Kovio has had to build its own 22,000-square-feet manufacturing facility and build a lot of the infrastructure itself. Full told, scientists have been talking about creating the technology for more than 35 years.

The RFID chips that came out in the 1990s from conventional silicon players have seen some disasters. Alien Technology raised $350 million to make RFID chips with a unique assembly technology. The company tried to go public, couldn’t get investors to buy into it, and wound up in a full-scale retreat. Kovio is trying to make its tags even more cheaply than Alien.

There are also challenges related to security and privacy. Early RFID chips were not encrypted and so represented big privacy risks. The newer chips can be encrypted and the range of radio detection is much smaller. Mashkoori said the radio range of its chips can be reduced to a few centimeters, reducing the risk of someone intercepting the radio signal and using it to obtain private information.

“It hasn’t been easy, but we have a tremendous opportunity ahead of us,” Mashkoori said. “We’re creating an industry.”

The potential market is huge. There are more than five trillion barcodes printed every year, with Coca Cola itself shipping a billion barcoded products a day. According to the research firm IDTechEX, the market for printed electronics is also picking up, with an estimated 2,200 companies working on such products.