The Burlingame, Calif., company, which started up last year as a puzzle game maker for the iPhone, launched its new version of its platform at Apple’s Worldwide Developers Conference in June, adding new social capabilities. 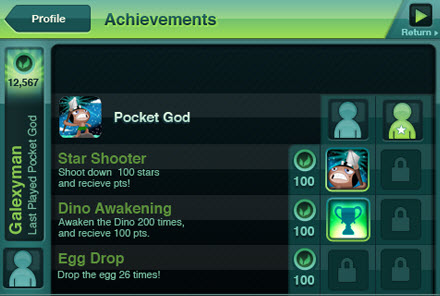 Dozens of game developers have used the platform in their newest games. Pocket God — the hit title we just wrote about — used it to add features such as leaderboards, achievements (pictured right), game lobbies where players can discover other games, and one-touch purchases of goods.

As a result of the success, Aurora Feint is now removing the pennies per user fee that it charged independent developers. That means developers can add OpenFeint 2.0 features for free, which will put some pressure on rivals who do the same thing, including Scoreloop and Viximo. Chillingo also launched its own social platform, dubbed Crystal, today.

Like Aurora Feint, some of these companies started as game developers. With more than 65,000 apps on the iPhone, it’s easy to get lost. Every developer needs a social networking platform to help their games spread, as pointed out by Mark Pincus, chief executive of Zynga, in a recent interview.

Dave Castelnuovo, creator of Pocket God, said, “Now that OpenFeint is free, there is no excuse not to use it. OpenFeint isn’t just about leaderboards and chat: it’s fast becoming a full featured community hub that gives your app stickiness and allows users that don’t have your app to discover and purchase it within other OpenFeint enabled apps.”

Jason Citron, co-founder of Aurora Feint, said the company can still make money through Apple’s affiliate sales program. Normally, Apple gets a 30 percent cut of sales on the AppStore, while the app developer gets 70 percent. If a user buys a game through the discovery promos on OpenFeint, then Aurora Feint gets a 5 percent cut, Apple gets 25 percent, and the developer still gets 70 percent.

Peter Relan, chairman of Aurora Feint, says the firm can also make money by layering monetization services on top of the platform in the future. Aurora Feint says it has more than 1,000 registered developers for OpenFeint. The company’s goal is to make it the defacto choice of indie developers when it comes to choosing a social platform for the iPhone. Aurora Feint has eight employees and raised $250,000 at its founding. Now it is entertaining investment options with a number of potential partners.