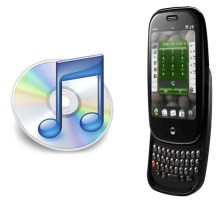 Apple PR wrangler Natalie Kerris has officially confirmed to BusinessWeek what Pre owners have been tweeting: “iTunes 8.2.1 … disables devices falsely pretending to be iPods, including the Palm Pre. As we’ve said before, newer versions of Apple’s iTunes software may no longer provide syncing functionality with unsupported digital media players.”

Just this second, Palm spokeswoman Lynn Fox has sent out a counter-snipe: “Palm’s media sync works with iTunes 8.2. If Apple chooses to disable media sync in iTunes, it will be a direct blow to their users who will be deprived of a seamless synchronization experience. However, people will have options. They can stay with the iTunes version that works to sync their music on their Pre, they can transfer the music via USB, and there are other third-party applications we can consider.”

Anyone else up for Mobile Fight Club? It’ll be more fun than battling press releases.