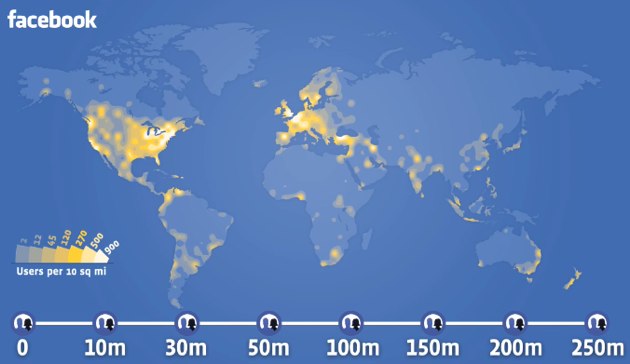 Facebook likes to keep its traffic numbers close to its chest. Its last update was at the beginning of April, when it said it hit 200 million monthly active users worldwide. Today, it says it has 250 million monthly active users — so an increase of 50 million users over the last three and a half months. This sort of growth, at least in theory, is what the company needs to keep seeing if it wants to become a multi-billion dollar business.

The more people it can get using the site and sharing information, the more data it has about those users — then, it can use that data to better target ads at them. But advertisers, especially large brands, need to see traffic volume if they’re going to run expensive campaigns with the company. Traffic volume, that is, within countries like the United States, with demographics that advertisers want to pay a lot to reach.

Facebook says that 70 percent of its users are outside the US. As you can see from the embedded video, Facebook does have a strong presence in other advertising-rich countries, like the UK and Canada. But it is growing in internet-connected places around the world (judging from the map, mainland China’s growth is especially surprising to see). In order to monetize all of its users in the foreseeable future, the company is experimenting with more forms of virtual goods and currencies. Its virtual gift store has been around for years, and is reportedly bringing in good money, but now it is rolling out a virtual payment system for developers, and letting users pay in a variety of currencies. It’s unknown how much Facebook might make from those efforts, although other virtual goods companies are reporting strong numbers (including companies on Facebook’s own developer platform).

Still, according to Google Trends, Facebook slow traffic ascent in the US has nearly brought it on par with Yahoo’s increasingly unpopular but advertising-rich portal site. That, even now, seems to be getting some major advertisers’ attention. Facebook has self-reported strong revenue growth this year, projecting $550 million or so by year’s end. Some of that is from large brands, some from performance marketers using the site’s self-serve ads. Board member and respected entrepreneur Marc Andreessen has gone on the record to say that he thinks the company will be making billions in future years.

With these growth numbers, the company’s big plans still seem to be on the right track.