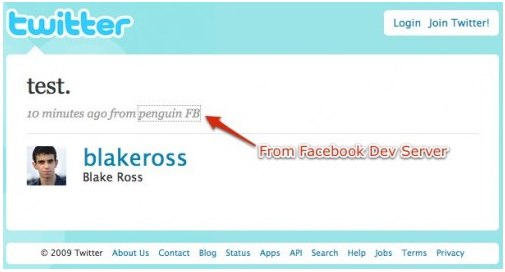 Now this is interesting. Facebook, which at one point a few months ago seemed set on becoming Twitter, might now be experimenting with a way of making its service work rather smoothly with the microblogging service. Earlier today, Inside Facebook spotted a tweet from Facebook developer Blake Ross, who said “test” from a service called “penguin fb” (he’s since taken it down).

Facebook has gone around saying that it sees itself and Twitter as two distinct services — so that point at least seems to be bearing out.

Meanwhile, Facebook is letting people send status updates to “everyone” on the web, not just their friends. It seems to want to be more open, while at the same time retaining the value it has in connecting real friends.

We don’t know if this is a truce offering, or a Trojan Horse. Here’s what Facebook told me when I asked if they had any further comment: “Correct, we don’t have anything to share about Blake’s tweet.”