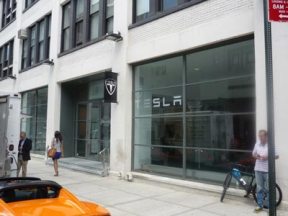 Previously, Tesla only had showrooms in London and Menlo Park, Calif., neighboring its San Carlos headquarters. And even though it just got a $465 million infusion from the U.S. Department of Energy, its decision to open up the pricey location in New York (estimated to be between $235,000 and $258,000 a year) has raised some eyebrows. Yes, the company has had some money troubles in the past (due mostly in part to product delays and underestimation of costs). This might not inspire confidence in its financial decisions. But as Business Insider points out — with the price tag on the Roadster sticking at $109,000 — Tesla would only need to sell 90 cars a year to support the space. The company has already delivered 500 of the Roadsters — including 40 in the New York area. The new showroom is in keeping with Tesla’s apparent strategy to rely on glitz and hype to remain a market leader — not to say it won’t follow through in the end, which it very well may, considering the success it has enjoyed so far.

The company has plans to open a sales and service center for its vehicles in New York as well. Its national rollout plan will then steam ahead with retail locations opening in Chicago, Seattle, Miami, Washington, D.C., Monaco, Toronto and Munich, Tesla says. 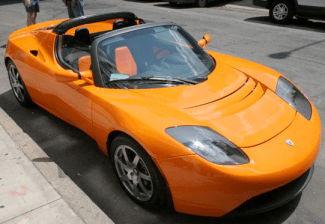 As for the 2010 model Roadster (see right), which will cost the same as its predecessor, it features several interior upgrades, including redesigned electronics and better cooling systems. The gear shift has been replaced by buttons, and the iPod dock is more conveniently placed. All of the vehicles also have a two-way cellular connection to the Tesla factory so that experts can diagnose problems with the car and remotely upload new software to its internal computer. And for those who like to split hairs, the 2010 model can go from 0 to 60 miles per hour in 3.7 seconds instead of 3.9. In addition to this new line, Tesla also introduced the Roadster Sport, which has manually adjustable suspension and more horsepower.

On top of that, the company launched a brand new financing plan for the Roadster through Bank of America — hoping that a more affordable option will multiply the number of prospective buyers. Now, customers who earn approval for a five-year financing plan can put $20,000 down before taxes and pay $1,700 a month at a 5 percent annual percentage rate. Of course, the percentage would vary based on the customer and credit ratings. Financing will be available for up to 75 percent of the car’s total price. For now, only U.S. buyers are eligible. The company says it plans to offer a similar plan for buyers when it releases its Model S sedan in late 2011.