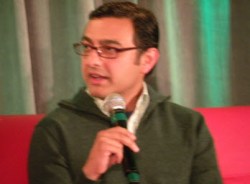 MobileBeat 2009 got off to a snappy start in San Francisco this morning. Google VP of Engineering Vic Gundotra evangelized his company’s put-it-in-the-browser religion by declaring, “We’re not rich enough to support RIM,” nor any other proprietary application platforms. Vic likes to grandstand, so he’ll be glad to know his zinger caught on with the audience.

At Google, Gundotra’s engineers are focused on building everything for standards-compliant browsers, and pushing the responsibility onto mobile handset makers to ship better browsers in their phones. Gundotra called Apple’s open-source webkit browser, the core of the Safari browser, “the killer app for the phone.”

The other plank in Gundotra’s platform is the unlimited data plan, which he said changes users’ behavior, although he didn’t specify how.

Nokia’s Tero Ojanpera, whose company dominates the market for non-smartphones ( “feature phones” in industry jargon), kept a wry eye on Gundotra throughout the session. He didn’t think Vic’s unlimited-data-for-everyone vision is realistic. But he agreed with Gundotra on this: Given the growth they’re seeing during a recession, phone makers and carriers alike should get ready for a consumer spending boom on wireless goodies when the economy comes back.