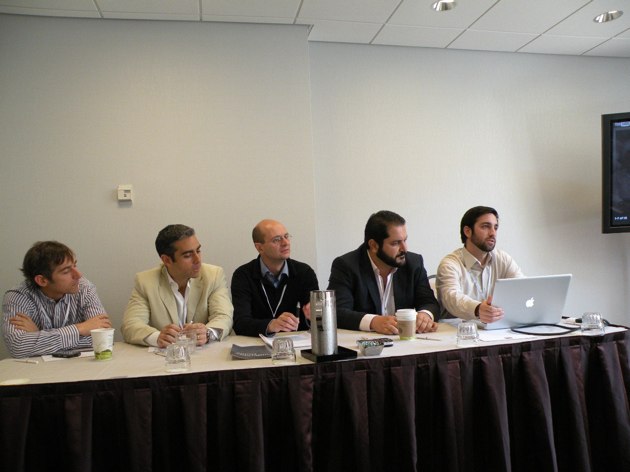 Mobile software on compelling new devices like the iPhone is creating huge new industries, but the world is a year or two away — at least — from seeing the results really manifest themselves.

Or that was the unsurprising consensus among the panelists I moderated yesterday at our MobileBeat 2009 conference (this is one of our last posts about the conference, so bear with me). The panelists included Facebook mobile head Henri Moissinac, payment service Zong chief executive David Marcus, social game developer Zynga chief executive Mark Pincus, and iPhone-focused game developer SGN chief executive Shervin Pishevar. These guys are in the middle of the changes, and they were generally quite optimistic — Pishevar and Pincus both predicted that the iPhone app store would be worth billions of dollars in the coming years.

Certainly, the iPhone has changed how the mobile industry thinks about mobile software design, and how it works with third parties. But the panelists recognized many immediate problems. Apple itself is still figuring out how to enable a great environment for developers. Meanwhile, social networking companies like Facebook are trying to bring their social networks to mobile devices. Facebook Connect for the iPhone, a formative effort by the company to let third party developers build iPhone applications that connect Facebook friends, is just three months old. For example, the company doesn’t — despite Pishevar’s recommendation and our speculation — have a good way for Facebook users to find cool iPhone applications that use Facebook Connect.

Many bigger questions loom. How will the iPhone and rivals like the Pre, the Android operating system and traditional device-makers like Nokia build out their software platforms for third parties. Basic issues like user acquisition on mobile devices, and monetization, continue to challenge many startups, and not even Apple has been clear about its vision as a platform.

There was a lot of detail in the discussion that might be a little too detailed for general readers, but might be more interesting to companies looking at building mobile software — especially software that uses social data. The full audio recording is here, courtesy of Stitcher. If you’re not into audio, Jessica Lee of Inside Facebook also took some solid notes, and produced this text transcription here.