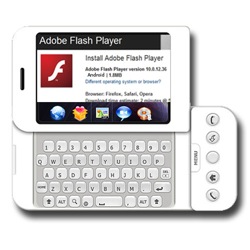 One of the big topics at our MobileBeat 2009 conference last week was whether the future of smartphones lies in native mobile applications that we download, or in rich mobile websites that we access through our web browser. Now Adobe may be giving websites a boost — it has plans to release a mobile version of its Flash platform (which powers many websites, videos, and other media) at the end of 2009 or in early 2010 that supports multi-touch interfaces and accelerometers, according to statements the company made at an analyst event earlier today.

ReadWriteWeb spotted the reports from Adobe’s event on Twitter (including this tweet from Redmonk’s James Governor: “[Adobe Chief Technology Officer Kevin Lynch] says beta for mobile Flash, unmodified, by end of 09. for embedding in early ’10 multitouch, accelerometer”) and noted this kind of support could make help boost applications on non-iPhone devices — after all, multi-touch and the accelerometer (plus the apps using those tools) are among the iPhone’s big differentiators.

Still it isn’t just about the iPhone versus other devices, but also about how we will use these phones, as we noted when Adobe announced the availability of the latest version of Flash on Android phones. One of the big arguments in favor of native apps, usually sold through an app store like Apple’s, is their ability to take advantage of device-specific features. If Flash-based mobile websites can access those features too, then that starts to chip away at native apps’ advantage. In other words, if you can include the same multitouch and accelerometer support in a website as you can in an native app, it might make more sense to build a website that works across multiple phones, rather than build separate products for the iPhone, Android, and so on — at MobileBeat 2009, Google Vice President of Engineering Vic Gundotra said, “We’re not rich enough” to build apps for every smartphone.

Of course, the next big questions are how well these features will be implemented, and how quickly they’re embraced by developers. I’ve emailed Adobe, and the company says it will be sending more details soon. As for the iPhone (where there has been constant speculation about when and if the device will support Flash), Adobe says it’s waiting for Apple’s approval. Still.

Update: An Adobe spokesman sent me the following statement via email, which doesn’t offer much more information, but at least confirms the reports.

Kevin Lynch has shown some of the great progress we’ve been making with Flash Player 10 for smartphones. As we’ve announced before, multiple partners have already received early versions of this release, and we expect to release a beta for developers later this year. Android, Symbian OS, Windows Mobile, and Palm WebOS will be among the first platforms to support web browsing with the newest Flash Player. Kevin also mentioned some of the new mobile features we’re working to include in Flash Player 10 including multi-touch (to allow users to easily interact with dynamic content) and accelerometer support (to understand the orientation of the device).