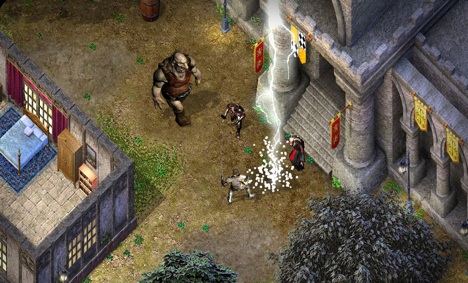 Electronic Arts announced a deal with Chinese game operator NetDragon Websoft to create a new version of the Ultima Online game for the Chinese market.

The deal shows that the Chinese online game market has become an attractive beachhead for the biggest video game makers as they adapt to a new world where online game play becomes more and more popular. Market researcher Niko Partners estimates that China’s online game market will grow 38 percent this year to $3.8 billion.

Hong Kong-based NetDragon Websoft will develop the massively multiplayer online game — where thousands or millions of players play simultaneously in a virtual world — in conjunction with EA’s Mythic Entertainment division. NetDragon Websoft will have the exclusive license to operate the game in China, Hong Kong, Macau and India.

EA is clearly going after Activision Blizzard’s World of Warcraft, the biggest paid online game in the world. World of Warcraft is in the midst of a difficult transition from one operator to another in China. The game has been down in China since June, long beyond its three-week transition plan, as operation shifts from The9 to Netease. The problem has given everyone else a chance to grab some of World of Warcraft’s customers in China. (The Chinese government has ordered changes to the game but will permit a partial launch for testing purposes to start on July 30.)

NetDragon Websoft operates a variety of online games in Asia, including Way of the Five, Eudemons Online, Conquer Online, Zero Online, Tou Ming Zhuang Online and Heroes of Might and Magic Online. It also has four games currently in development, including Tian Yuan, Disney Fantasy Online, Dungeon Keeper Online and CJ7 Online, which are expected to be launched as early as this year.

EA has been operating Ultima Online since 1997, when the fantasy role-playing game debuted.