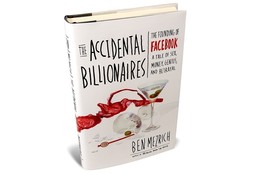 The Wall Street Journal asked me to review The Accidental Billionaires, a tale of Facebook’s founding written by Ben Mezrich.

You can read my review here, but here’s the VentureBeat version:

The book is a hot topic for two reasons. First, West Wing producer Aaron Sorkin is already working on a movie based on the book. Sorkin has posted about this on Facebook.

Second, Mezrich is infamous for his use of outright fiction to enhance his supposedly non-fiction writing. Typical example: in his earlier book Bringing Down the House, the story of the MIT blackjack team that concocted a way to win millions from Las Vegas casinos, the MIT team enlists strippers to cash out their chips. That didn’t happen. Mezrich’s defense is that it could have happened, and it makes a better story. Most people will agree to the last part. The truth is that without Mezrich’s infusions of non-fact, the tales he tells would be hopelessly dull. Oh boy, some MIT nerds learned to count cards. The people Mezrich writes about just aren’t as wild and crazy as we’d like them to be.

But compared to his past topics, the founding of Facebook is a much bigger story, one for which Mezrich’s book may become the official version, much as Oliver Stone’s cinematic versions of JFK and Nixon replaced the more fact-focused versions in history books. Facebook fans awaiting Mezrich’s book have wondered, how much of it will be true? Will they be able to cite passages from the book as true anecdotes, or will they be gullibly repeating fantasy as fact?

The good news is, you can skip the book. Mezrich, who applied his semi-fictional style of writing to three more books after Bringing Down the House, has overreached this time by trying to tell Mark Zuckerberg’s story without ever talking to Zuckerberg, who repeatedly refused to speak to him. The resulting work is awkward and feels contrived. A Mark Zuckerberg-shaped hole runs through the whole story.

Moreover, the basics of the Facebook founding tale are already known. As an undergrad at Harvard, Zuckerberg was enlisted by the twin Winklevoss brothers to do the coding for their Harvard Connection application that would let students check each other out online. Zuckerberg failed to deliver and instead launched his own site, thefacebook.com. He worked with a fellow student, Eduardo Saverin, and later brought on Napster co-founder Sean Parker to help build out Facebook into the huge, global directory it’s become. But along the way, Zuckerberg pushed out his series of co-founders, so that Facebook is his and his alone. The End.

Zuckerberg seems to be kind of a selfish jerk, unlike Google’s huggable Sergey Brin and Larry Page. But he’s so aloof that no one has been able to get to know that jerkiness enough to describe it in detail with real-life anecdotes. There was a fair chance that Ben Mezrich, based on his past works, might have been able to make up a convincing Zuckerberg character. Instead, The Accidental Billionaires feels like it’s waiting for its lead character who, despite his presence on the page, never really arrives.