Social address book service Plaxo has been busy over the last few years building out social features, like a lifestreaming service, and integrating social data from sites like Facebook. But now it’s moving deeper into helping people do business networking.

It has recently launched a new part of the site, called My Career. A key feature launching today is the “Company Navigator,” which lets you easily find all the people you’re connected to on Plaxo within specific companies. In the attached screenshot, you can see all of the people I’m connected to directly who work at Plaxo, or the people they know there.

The comparisons to business networking site LinkedIn are unavoidable. For example, LinkedIn launched a feature more than a year ago that shows you general information about companies, as well as who you’re connected to within them (here’s LinkedIn’s page for Plaxo). Among many other business networking features on that site, you can see up to three degrees of separation between you and a person you’re not directly connected to. Here’s how mine add up, below: 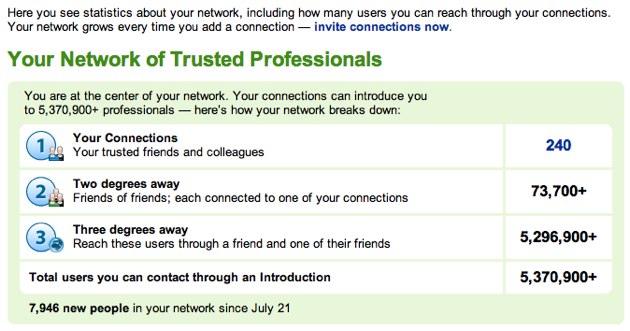 My Career could be described as a pared-down version of what LinkedIn offers. If you’re already a Plaxo user and you don’t like the feature-heavy LinkedIn interface, it may be more to your liking. But John McCrea, Plaxo’s vice president of marketing, makes the case that there’s something more:

I believe very strongly that we are in the first inning of the Social Web. That means that all of our collective efforts to bring a ‘people layer’ to the Internet are not fundamentally competitive, but rather grow the pie. Most of our very active users are also active users of LinkedIn, and that means Plaxo and LinkedIn really need to find ways to work together to deliver more value to our mutual members

Already, Plaxo has been at the forefront of integrating data from other sites. Its chief technology officer, Joseph Smarr, has been a leader in tech-company efforts to develop common standards for sharing data across web sites. Those efforts seem to be paying off for his company. Facebook has adopted a variety of open web standards in the past months that have allowed Plaxo to let users do things like find Facebook friends who use Plaxo, as well as let users share information like status updates back and forth between the two sites. McCrea says 150,000 people are using this integration, adding that it is “driving a great flow of content and tons of connections.”

Overall, Plaxo says it has 5.5 million unique visitors a month, half of whom are in the US, half outside, with a total of 42 million connections. These people generate some 47 million pageviews a month. Given that many people already use Plaxo for keeping track of business contacts, it’s worth paying attention to how the company grows the My Career section. 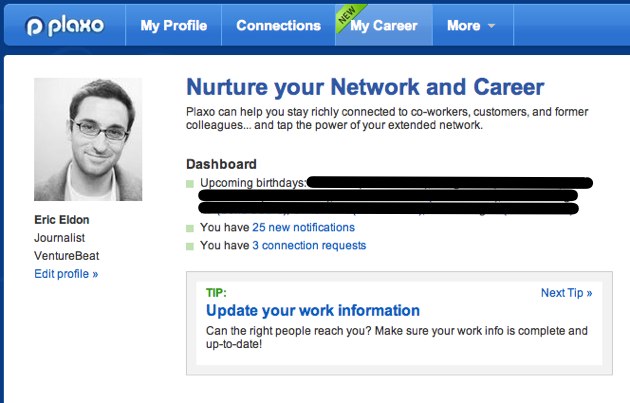