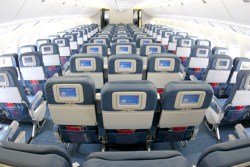 Imagine you’re running an airline. That means you’re trying to survive despite higher-than-ever fuel costs and a skittish population who balk at flying, either for work or leisure. Is there a way you can cut your costs further?

Yes: Remove your planes’ in-flight entertainment systems. Manufactured by, for example, Panasonic or Rockwell Collins, IFE systems are heavy, which adds to fuel costs. They’re pricey in terms of movie licensing fees. And travelers are increasingly tuning out the onboard video and turning instead to their notebooks, netbooks, smartphones and portable games to entertain themselves in flight. Updating Facebook, for many, is far more entertaining than watching a movie chosen by the airline. That means the airline could charge for Internet access, rather than trying to sell flyers a movie.

No airline has yet acknowledged plans to strip out its IFE, but Peter Harbinson, an analyst at the Center of Asia-Pacific Aviation in Sydney, told Reuters he can’t imagine the airlines aren’t thinking about it:

“There’re so many reasons for airlines to change the way it works right now. The biggest advantage for airlines is the weight of the IFE equipment. Fuel burned, regular engineering checks, and licensing fees to movie studios all add up to a considerable amount of money for airlines.”

Reuters reports that airlines on the other side of the Pacific rim — Cathay Pacific Airlines and Singapore Airlines — already offer USB jacks and a power socket to economy-class passengers. In the U.S., Delta offers in-flight Internet access, but it’s not yet a standard feature.

To be clear, no airline has yet stripped out its IFE system. As reported by travel blog Jaunted, some airlines are beefing up their IFE with substantial MP3 and video libraries. But imagine if you were starting from scratch right now. Would you install video screens on every seat? Or would you give flyers a reliable Wi-Fi network and let them entertain themselves?