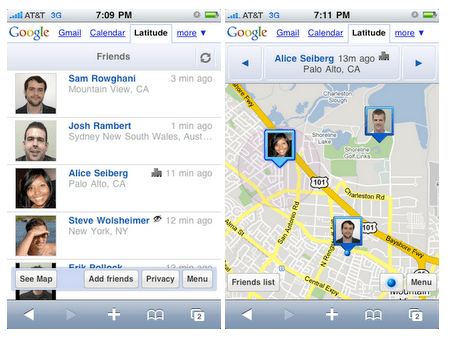 Commence geostalking on the iPhone.

Google added Latitude to Apple’s smartphone today, but it’s on the web instead of in the app store. Latitude, which came out in February, is a social layer over maps that shows your location in real-time. Google said it chose the web route because Apple was concerned users would confuse Latitude with Maps. However, Google vice president of engineering Vic Gundotra provocatively declared last week at VentureBeat’s MobileBeat conference that it viewed browser-based apps as the future, instead of closed environments like the app store.

Latitide can also show your friends’ locations, so you can log-in, see if any friends happen to be nearby and spontaneously meet up. (Naturally, it also raises major privacy concerns, although Google is careful to emphasize that you can control with whom and how your location is disclosed.)

The iPhone edition of Latitude comes without teeth, because there’s no mechanism for applications to run in the background on the iPhone. This means this version of Latitude won’t update your location continuously the way it does for Android, Blackberry, Symbian and Windows Mobile users. (This would be true even if Latitude was a native application, but then at least it could remind you where your friends are via push notification, like location-based social app Foursquare.) This is a massive barrier, because it means you won’t get live locations for your iPhone-using friends unless they check in at www.google.com/latitude constantly.