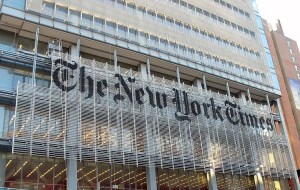 The New York Times Company’s cost-cutting efforts and higher newsstand prices have paid off, but the company has a long way to go to get itself out of financial trouble. Second-quarter profit clocked in at $23.3 million after factoring in employee severence and pension packages, plus (or actually, minus) depreciation and amortization of its assets, which include the new office building just outside Times Square in Manhattan. That’s a 42 percent drop from last year’s $40.3 million profit in the Q2. The weaker income is despite the paper’s increased newsstand prices for the New York Times, Boston Globe, and several regional papers the company owns, such as the Gadsen Times in Gadsen, Alabama.

The problem is simple: Advertising income at the Times is down 30 percent from a year ago. The company’s other oversized problem is its debt, which today’s earnings report says still hovers at just over $1 billion.

The company’s focus, at least in its public statements, is on cutting operating costs that eat into profits. President and CEO Janet Robson said in a prepared statement that “We lowered our operating costs by about $210 million.” Robson added, “With our many initiatives to operate more efficiently and effectively across the Company, we are on course to achieve approximately $450 million in savings this year, which amounts to 16 percent of our 2008 cost base.”

But as the saying goes, no one ever cut their way to greatness. Without a turnaround from deflating ad sales to an aggressive new growth in some kind of revenue, the Times will have trouble delivering the exceptional, expensive journalism that made it the world’s most authoritative source for news and commentary.