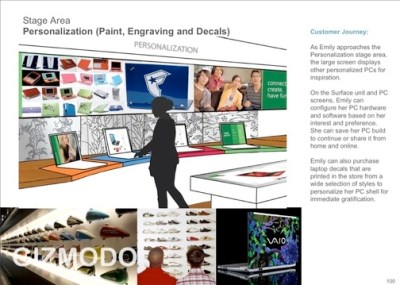 Gizmodo’s editors got their sweaty, shaking hands on design and branding firm Lippicott’s plans for Microsoft’s retail stores that the company plans to plunk down right next to Apple Stores. Lippicott’s 54-page presentation shows an impressive combination of Apple Store ripoff with a brightly colorful environment wrapped in wall-size video screens. A character named Emily is used for narrative texts that accompany the illustrations of, for example, the laughably familiar Answers Bar.

Microsoft’s Surface touch-screen interface also plays a major role in the store’s vibe. Lippicott has taken Apple’s newfound jones for touchscreens and perky little apps, and pushed the limits of how big and busy the store’s displays can be.

The company has struggled since its birth with the public perception that Microsoft just isn’t cool, isn’t sexy, is a bunch of dorks with no lives. The stores are clearly a no-holds-barred, cost-be-damned assault on that image. The store in Lippicott’s illustrations is the stylistic opposite of a Best Buy. It makes Apple’s store look sterile and pale. Yet it will be packed with affordable netbooks, sub-$1,000 computers, and Windows Mobile phones, which never seem to get as good a display as iPhones and BlackBerrys from wireless carriers.

Windows Vista didn’t catch fire with consumers, but the company has at least gotten past its Blue Screen of Death years. While Apple soaks up the pricey end of the market, Microsoft has concocted a new image for itself: Stylish, but always affordable.