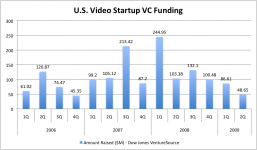 Video funding has tanked in 2009 — Venture funding for video-based companies in the U.S. so far this year has dropped more than 60 percent from the same period last year. Only 24 funding events have been logged so far, compared with 52 last year. NewTeeVee reports that total investments are down from last year’s $348 million to $135 million this year. Yet there are bright spots, such as 5min’s $7.5 million second round this week.

Hacker says iPhone encryption is far too sloppy for corporate data, posts videos to prove it – – Jonathan Zdziarski, an iPhone developer who also teaches courses on recovering data from the lovable touchscreen devices, told Wired he thinks iPhone secuity is a joke: “. “I don’t think any of us [developers] have ever seen encryption implemented so poorly before, which is why it’s hard to describe why it’s such a big threat to security.” Wired has sample videos of Zdziarski snarfing suppostedly locked-down info off an iPhone in seconds. 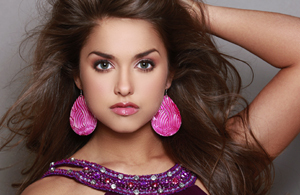 Ustream partners with Miss Teen USA in hopes of reaching  mainstream media status — Former lifecasting hub Ustream clearly wants to be thought of as a TV channel on par with CBS, CNN or HBO. Miss Georgia Teen USA, Brooke Fletcher, pictured here, and contestants from all  50 states will converge on the Atlantis hotel in the Bahamas next Friday the 31st.  Ustream’s embeddable player will carry the event online, while NBC Universal handles broadcast and cable television coverage.

Former Facebook employees may not get to cash out —  Russian company Digital Sky Technologies has begun the process of buying up to $100 million worth of Facebook common stock from current and former employees at $14.77 per share. But the program puts current employees ahead of those who’ve left the company. Reuters talked to a Facebook insider who said the best hope for ex-employees is that DST decides to buy more shares after the program ends next month.

Searchme is gone — The “visual search engine” that raised $43.6 million since its July 2005 founding has ceased operations, redirecting traffic to google.com. TechCrunch got a long email from CEO Randy Adams: “To compete with the likes of Microsoft, Google and Yahoo,it was going to take at least $100 million, half to build the back end across thousands of servers and half to get distribution.  In this economy nobody wants to invest that kind of money in a company that is pre-revenue, even if the net result is potentially a multi-billion dollar company.”
Apple blocks “augmented reality” apps until September — A new genre of app that overlays data onto a real-world view won’t be available in the App Store until September, when the iPhone maker releases version 3.1 of its iPhone software. Augmented reality apps, such as the New York subway map shown in the video below, will rely heavily on the compass built into the iPhone 3G S.
[youtube=http://www.youtube.com/watch?v=cH6r2tIaRXU&w=425&h=344]