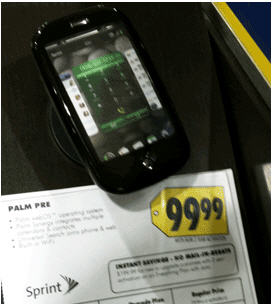 An unknown number of shoppers over the weekend were able to purchase Palm’s hot new Pre smartphone for half its current price. A “human error” listed the Pre for $99 instead of $199 in a printed advertisement. A Best Buy store in San Francisco sold 10 of the 30 Pres in stock at the misquoted price, according to a Wall Street Journal report.

The episode highlights a mobile industry truism: Handset prices are pretty much whatever the seller wants them to be. Subsidies by wireless carriers keep handset prices affordable to consumers, and those subsidies can vary wildly. Buyers seem to have figured that out — it’s completely believable that a Pre would cost less than a BlackBerry Curve.

What’s funny about the Pre pricing episode is the non-response to the ad. The misprinted price didn’t cause stampedes on Best Buy stores the way that, say, “$49 iPhones” might have done. It suggests that smartphone buyers are not choosing their handsets based on price. An employee at another San Francisco Best Buy admitted to the Journal that the store had only sold two of its three Pres in stock.