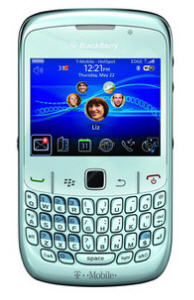 BlackBerry’s new Curve 8520 will be available at Wal-Mart stores in early August for the iPhone-undermining price of $48.88 with a two-year T-Mobile service contract. (T-Mobile stores will sell the phone for $129.99.) The phone, aimed at young social networkers rather than business people, trades off 3G speed for Wi-Fi and digital media support.

The 8520 comes with two gimmicks. One is an optical trackpad in place of the BlackBerry trackball found on the Curve 8300 models. Hopefully the trackpad is more amenable than the trackball to being thumbed while eating a cheeseburger. (I have firsthand experience with food damage to the Curve’s trackball.)

The phone’s other feature is easy access to social networks and digital media. The 8520 has menu options to upload photos and video to Facebook and MySpace, plus dedicated keys on top of its shell for playing music and video clips.

BlackBerry maker Research in Motion promises the Curve makes it “easy to quickly sync music from iTunes or Windows Media Player.” Be aware that audio files protected by iTunes’ copyright protection technology won’t play on the 8520.

The camera is the same 2 megapixel model found on other Curves. It shoots both still photos and video.

The 8520 has one huge shortcoming. It doesn’t do 3G. So while you can get onto most networks in most countries thanks to its four-band support, you’ll be stuck with slower Edge networks, unless there’s a Wi-Fi router within range. That seems to be the phone’s target demographic: Young people who hang out in Wi-Fi hotspots.

Wal-Mart’s price reinforces something I’ve been typing about a lot in the past months: Mobile phone handset prices are almost completely arbitrary, usually lowered by subsidies from wireless carriers. The only question is how much of Wal-Mart’s eighty-one dollar price reduction came from Wal-Mart, from Research in Motion and from T-Mobile?