[If you’d like, we can continue the discussion in the comments!]

If I were to ask: “What was the last video game you throughouly enjoyed?” Would you be able to respond with anything recent like Gears of War, Wii Sports, or Little Big Planet, or would you begin to travel back to the good ol’ days when Super Mario, Pong, and Tetris quintessentially ruled the world?

Whatever your answer may be, games have made undeniable strides in their technical capabilities and because of this, are able to elicit increasingly varied emotional responses from their recipients.

For example, Gears of War gives players the opportunity to instate exuberant amounts of carnage because of the game’s nature — a summer movie flick aimed at young males. In Wii Sports, however, there is no outwardly explained story. It is instead through the very concentrated, streamlined images (dumbbells, tennis ratchets, bar graphs, etc.) that the game is able to communicate its purpose and therefore cause people to enter a certain frame of mind and possible familiarity. 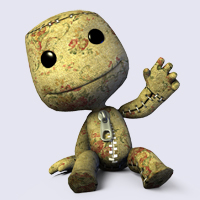 Finally, Little Big Planet systematically guides players through various tutorials used for creating levels and allows a great deal of freedom throughout the process. Take that and add in the fact that these creations can be shared, rated, and downloaded similarly to Youtube videos, and a community is quickly created that individuals can become attached to.

The examples I’ve just provided are a few of the many titles trying to do something much greater than fitting blocks perfectly into place or running from point A to point B without getting hit, but they are hardly recognized by less experienced audiences as anything more that children’s toys.

Perhaps this is the reason games are constantly scrutinized by politicians and certain, now disbarred lawyers while films that touch on the same themes or reach an even higher level of grotesqueness are left largely unnoticed by the public eye. Hilary Clinton is one of the more prominent figures that have spoken out against violence in video games, which is fine when the investigations do not portray the products themselves as the culprits.

“Children are playing a game [Grand Theft Auto] that encourages them to have sex with prostitutes and then murder them…This is a silent epidemic of media desensitization that teaches kids it’s OK to diss people because they are a woman, they’re a different color or they’re from a different place” (Gameindustry.biz).

I am not here to make a rebuttal about how young children do not play games like Grand Theft Auto because they do, but I must point out a commonly overlooked detail. It is not mentioned, unfortunately, that every video game has a rating that ranges from “E for Everyone” to “M for Mature” or that these games will not (or at the very least should not) be sold to anyone under the age of 17.

If a title like Grand Theft Auto does find its way into the hands of a twelve year old, how can anyone blame the game itself for its creative merit rather than the parent or retailer that allowed the child to purchase it?

In addition, should there not be more examples from various media types to help show this “desensitization” Clinto speaks so adamantly about? If a movie has a scene where a prostitute is killed or there is sex involved, should the movie be canned and put on display as an example of “media desensitization”?

The same can be asked of books.

When I say these things please bear in mind that I do not mean to speak directly against any politician of political party; I only wish to ask why there is a negligence to acknowledge all media types instead of video games exclusively as being potentially detrimental when experienced by an audience that is not mature enough to handle it.

Perhaps we, the observers and consumers of the medium, or rather, the individuals within the gaming press are to blame.

In reality, it’s probably a bit of both.

It is become painstakingly apparent that video games are not regarded with the same prestige as movies or books, but is that because developers don’t want to make products that put players in realistically mature and intellectual situations, or is it because we, the gamers, the consumers, don’t want to be forced into a truly unsettling and/or morally ambivalent headspace?

When someone like Cooper Lawrence — a psychologist, radio host, and author — speaks erroneously about a game and then apologizes for her mistake after experiencing it for herself, wouldn’t it have been interesting to see a follow-up story on Fox (“big ups” to gamepolitics.com for their report) wherein the sexual experience is discussed from varied perspectives; to hear the opinion of someone who is less familiar with video games juxtaposed with someone who is inundated with information rather than skirting around the mistake?

Who does the responsibility fall on to help push games into a space more generally accepted by people less versed in the medium; a space where developers aren’t being called “stunted adolescents” and said to lack a desire for “responsibility, introspection, intimacy, and intellectual discovery”?

Heather Chaplin’s statements may have been a bit harsh, yes, but when will we — those in the enthusiast press, developers, and consumers — be able to break away from typified expectation, while simultaneously seeking and rewarding developers for molding more creative and varied experiences?