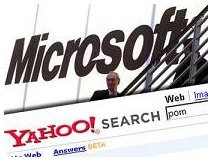 Microsoft and Yahoo have announced an agreement that lets Microsoft’s Bing search engine take over Yahoo’s search site, and in turn gives Yahoo control over premium search advertising for both companies.

The deal significantly changes the landscape of the search advertising market, a fundamental driver of much of the new Web economy. Small and large businesses alike have placed advertising alongside search results, in an effort to boost their business. But Google has emerged as the undisputed leader in the market, boasting a search engine that has a much wider reach than both Yahoo and Microsoft combined. Google is also widely perceived to offer a superior search engine experience. By pooling their resources, Yahoo and Microsoft, the No. 2 and No. 3 players in search respectively, the two companies hope to mitigate Google’s dominance. Both companies have seen worrying market share erosion, and experts have been saying for at least two years that some sort of merger between the two should happen.

The deal comes about two months after Microsoft launched Bing, a revamped version of its search engine. With a massive marketing effort, it appears to have already taken market share from Yahoo. Under the deal, Microsoft will build on that momentum: The accord gives it an exclusive license to Yahoo’s core search technologies as well as the ability to integrate them into Bing. While Microsoft takes the lead on the product offering side, the Microsoft-Yahoo partnership will rely on Yahoo to lead efforts on the advertising side. Yahoo has a much larger network of advertisers, and Microsoft will be able to let its advertisers access Yahoo’s network. This is attractive to advertisers, since they generally like to maximize distribution.

The agreement covers search only, and will last for 10 years.

The deal now appears to make a lot of sense. Just 18 months ago, such a deal seemed really tough: Microsoft offered to buy Yahoo last February, but Yahoo treated the offer as hostile. That was when Yahoo was led by co-founder Jerry Yang who oozed a sort knee-jerk animosity toward Microsoft. With Yang now out of the company, and the more pragmatic outsider Carol Bartz now at the helm, a deal between the two companies suddenly became much more likely, especially since the market share of both companies has continued to tank.

Microsoft’s Bing will control the algorithmic search and paid search platform for Yahoo sites. Yahoo will, however, get to to use its technology and data in other areas of its business, in particular its display advertising. Both companies will maintain separate display ad businesses and sales forces.

Yahoo’s salesforce, however, will have direct relationships with both companies’ premium search advertisers. The self-service ad platform for both companies will be Microsoft’ AdCenter, which will set prices for the automated auction process.